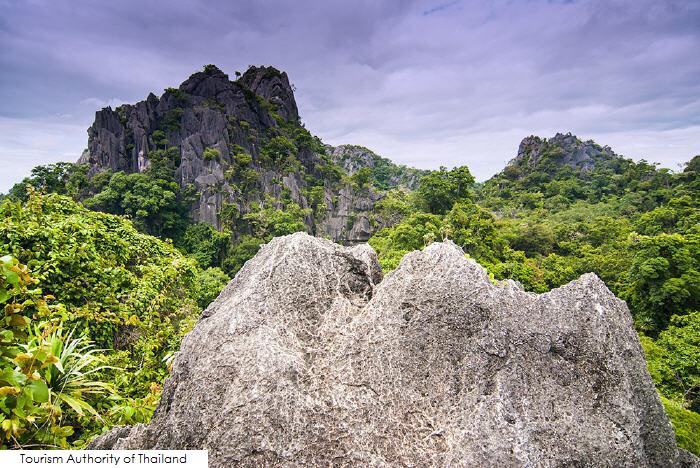 Beautiful destinations in Thailand to explore besides Bangkok, Chiang Mai and Phuket

There are so much more to Thailand than popular destinations like Bangkok, Chiang Mai and Phuket. In fact, there are 77 provinces waiting for you to explore. These beautiful destinations in Thailand, under the “12 Cities Hidden Gems” project from Tourism Authority of Thailand (TAT) will bring you to 12 fascinating provinces in Thailand.

Nan is a tranquil province bordering Laos. It is one of the 12 beautiful destinations in Thailand listed by TAT. Nan is a refuge for travelers who wish to explore the rich natural beauty of northern Thailand and its rich cultural heritage in peace and tranquility. This remote province sees far fewer visitors than neighboring Chiang Rai and Chiang Mai.

In addition, Nan features six national parks, thus, making it an ideal destination for trekking. At the same time, it has a number of hill tribe communities, including Hmong, N’tin, and Khamu. Nan is also devoted to agriculture, particularly rice and fruit cultivation.

You can explore the sacred temples and then relax at one of the restaurants or bars along the town’s riverfront in the provincial capital of Nan before planning your next adventure to another one of the 12 beautiful destinations in Thailand.

Lampang is known as the city of horse-drawn carriages. It is the only province where visitors can take a horse-drawn carriage ride around the city and along the Wang River. Tourists typically pass by Lampang on the way to Chiang Mai. This laid-back town is well worth a stop over. For one of the best examples of Lanna architecture in Thailand, you can visit the famous Wat Phrathat Lampang Luang. It was said that the Buddha once visited the site some 2,500 years ago and donated a lock of his hair, which is now enshrined in the temple’s large chedi.

In addition, you can also visit the Wang Kaeo waterfall, and the compact and yet charming Chae Son National Park, which combine a natural hot springs with large waterfalls.

Phetchabun province is another one of the beautiful destinations in Thailand to explore. It is where the scenic Nam Nao National Park is situated. Home to more than 100 species of birds, the park is a protected large forest still in its original state.The average annual temperature is 25 Degree Celsius. The coldest month is November with temperatures as low as 0 Degree Celsius.

The other popular national park is Khao Kho National Park, which has been referred to as “Little Switzerland” because of its beautiful scenery and cool weather.

One other popular attraction is Phu Thap Boek which is often referred to as the highest point in Phetchabun province. During the rainy season, you can see the sea of mist engulfs the hills both in day and night.

Loei Province, 520 kilometres from Bangkok, is a challenging place for nature lovers who want to admire the scenic beauty of Phu Kradueng National Park in the cool season.

Phu Kradueng is a sandstone mountain with a vast plateau, cut through with trails and peppered with cliffs and waterfalls. The highest peak is 1,316 metres above sea level. The plateau of Phu Kradueng composes of pine forest and grassland, with a variety of flowers, creeks, waterfalls and rocky fields, making it another one of the beautiful destinations in Thailand. In the rainy season, heavy rains can cause flash floods in the streams. Thus, the park is closed during June and September every year for the safety of visitors.

Another beautiful destination to explore is Suan Hin Pha Ngam Park (Thailand’s Kunming), located in Puan Phu, Nong Hin. This Park has limestone mountains that have eroded over time to form interesting shapes. There is a path which winds through the rocks, and leads to the lovely Suan Hom and Phiang Din Waterfalls. The park is south of town on Highway No. 201. Proceed past Wang Saphung to Nong Hin then take another road for 20km.

Buriram, 410 kilometres from Bangkok, comprises of plenty of Khmer ruins. This province is where the Phanom Rung Historical Park is located. It is the most beautiful temple complex situated on top of an extinct volcano with the magical phenomenon of sunlight shines through 15 doors.

Damnoen Saduak Floating Market, located about 80 km southwest of Bangkok in Ratchaburi province is one of the largest floating markets in Thailand. The best time to visit the market is the early morning, as early as possible so as to avoid most tourist crowd and before the produce is sold out.

Rom Hoop Market (original name Talad Rom Hoop) is a fresh market in Samut Songkhram province that you shall not miss. Also called Maeklong Railway Market, stalls are lined along a 100 metres portion of Maeklong railway track. When the train is approaching, vendors and shoppers have to clear the track for the coming train; vendors will quickly fold away their umbrellas or awnings and remove their containers and goods placed close to the track. The train moves slowly through the market, passing the vendors, shoppers and stalls just a few inches away. Once the train passes, businesses resume as if nothing has happened. The train passes through the market 8 times a day (4 arriving and 4 departing).

Come afternoon, you can head to the Amphawa floating market located near Wat Amphawan Chetiyaram. This weekend market at the Amphawa Canal, from Fridays onward, brims with boats loaded with drinks like O-Liang (Thai iced black coffee) and food such as fried sea mussels, noodles, and sweets. Bank-side wheelbarrows also offer goods for sale.

Opening: Friday-Sunday, 12:00-20:00 (Amphawa floating market)
Getting to Samut Songkhram: There are bus services to Samut Songkhram (Maeklong) from the Southern Bus Terminal on Borommarat Chachonnani Road in Bangkok starting from 6:00.

Ko Kut (Koh Kood) is an island in Trat Province and the easternmost island before Cambodia. The island is a popular spot for package tourists and families. The island has virtually no night life, so if you are after partying this is definitely not the place to go.

The weather in and around Trat is very comfortable, with warm temperatures throughout the year. The region is influenced by the northeastern and southwestern winds, which sometimes limit sea transport to only the most visited islands, particularly from May to October when the southwest monsoon blows. During this period the western coast can be wet and stormy and occasionally unsuitable for ferries and smaller boats to lift anchor. However, Ko Chang is popular year round and visitors can still easily and safely visit the island via the normal ferry routes.

Chanthaburi, 245 kilometres from Bangkok, is a coastal province famous for its gemstones and tropical fruits, particularly durian. The surrounding hills rich with verdant forests and scenic waterfalls, and the nearby quiet fishing villages and peaceful beaches makes Chanthaburi one of the 12 beautiful destinations in Thailand listed by TAT.

Chumphon, 463 kilometres from Bangkok, is the province located in the top of Southern Thailand. With its own airport, Chumphon Airport located in Pathio District, it is known as the gateway to the southern region. Chumphon has been able to maintain its natural beauty and remain largely untouched by tourism and is relatively unspoiled. Truly a gem and one of the 12 beautiful destinations in Thailand. It has a coastline offering pristine uncrowded fine-sand beaches, especially along the Pathio’s Gold Coast, like Thung Wua Laen, Bang Son and Ao Bo Mao.

Trang, also called Mueang Thap Thiang, is one of the southern provinces of Thailand 828 kilometres from Bangkok. It is an undiscovered hidden gem and one of the 12 beautiful destinations in Thailand. Quiet and unassuming, Trang could compete with popular Krabi. With a stunning coastline of secluded beaches and uninhabited islands, clear and green water, and towering cliffs, Trang offers peace, tranquility and a place to relax without the intrusion of mass tourism.

Caves, waterfalls, hot springs and lakes provide perfect venues for adventure and nature lovers. One of the popular attractions is the Morakot Cave (Emerald Cave) at Ko Mook in Haad Chao Mai National Park where tourists swim about 70 metres, during low tides through the cave, to discover a hidden paradise on the other side.

Trang has been named by CNN travel as Thailand’s next big island-hopping destination. It’s going to become huge, so get there before the crowds do and explore this beautiful destination in Thailand. 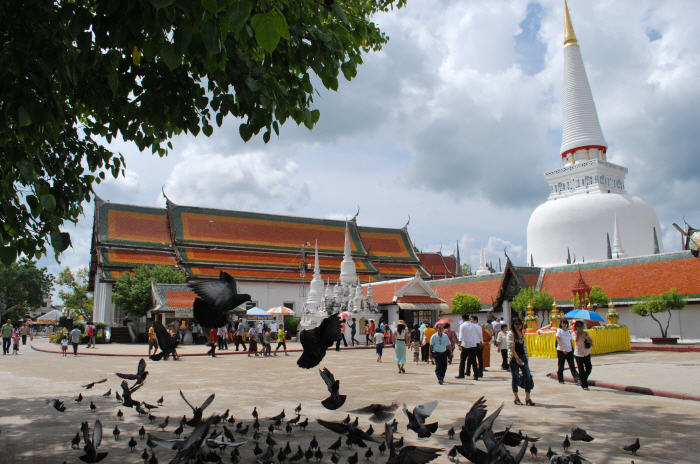 Nakhon Si Thammarat is a southern province of Thailand 780 kilometres from Bangkok. It is the land of predominant Buddhism during the Srivichai period. Wat Phra Mahathat Woromaha Vihan is considered the most important temple in Nakhon Si Thammarat and in Southern Thailand. It was constructed at the time of the founding of the town, and contains a tooth relic of Buddha.

In addition, Nakhon Si Thammarat is also famous for its Hat Khanom-Mu Ko Thaletai National Park. Hat Khanom part of the name refers to the beaches of Khanom district, and the Thaletai refers to the archipelago, consisting of 8 islands in the Gulf of Thailand between Khanom and Samui island. Further areas belonging to the park are forested hills, and mangrove forests along some of the creeks.