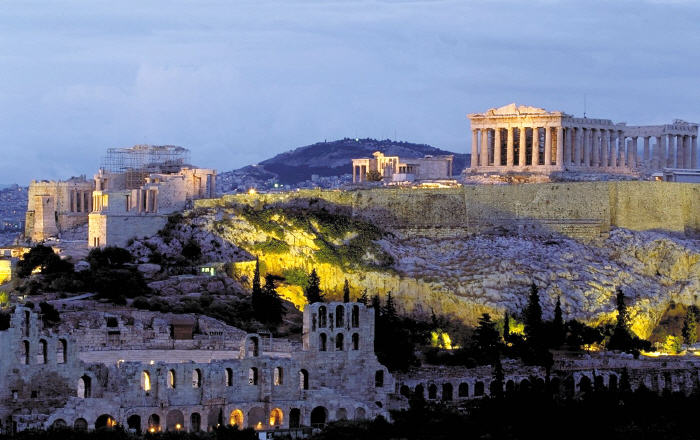 Athens is the historical capital of Europe with a long history; dating from the first settlement in the Neolithic age. Over the years, a multitude of conquerors occupied Athens, and erected unique, splendid monuments – a rare historical palimpsest, evident everywhere in the city. In 1834, it became the capital of the modern Greek state and has since become an attractive modern metropolis with unrivalled charm.

Athens is a must destination that combines modern urban innovation with history, culture and natural beauty throughout the year. A large part of the town’s historic centre has been converted into a 3-kilometre pedestrian zone, which is the largest in Europe. It leads to the major archaeological sites (the “archaeological park”), simulating the ancient landscape. Either on foot or by bike, the “Grand Promenade” is an unforgettable experience and journey through history. 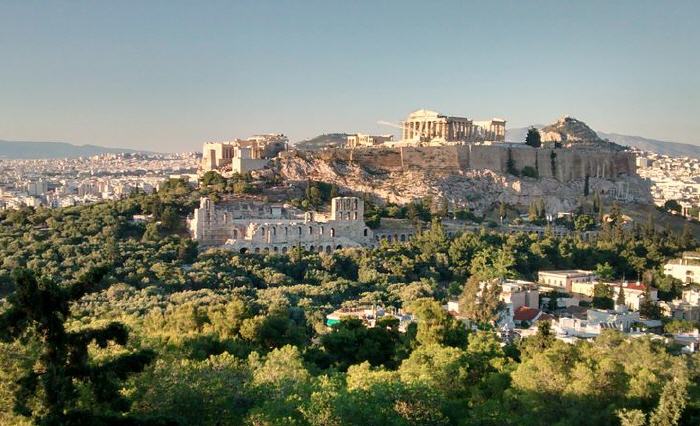 The Acropolis of Athens is an ancient citadel located on a high rocky outcrop above the city of Athens and contains the remains of several ancient buildings of great architectural and historic significance, the most famous being the Parthenon. The Acropolis became a World Heritage–listed site in 1987. A visit to Athens is not complete without visiting the Acropolis. Hundreds of tourists visit the Acropolis daily, making it one of the top tourist attractions in Athens. If possible, get there early to avoid heavy crowds, and summer heat when relevant. 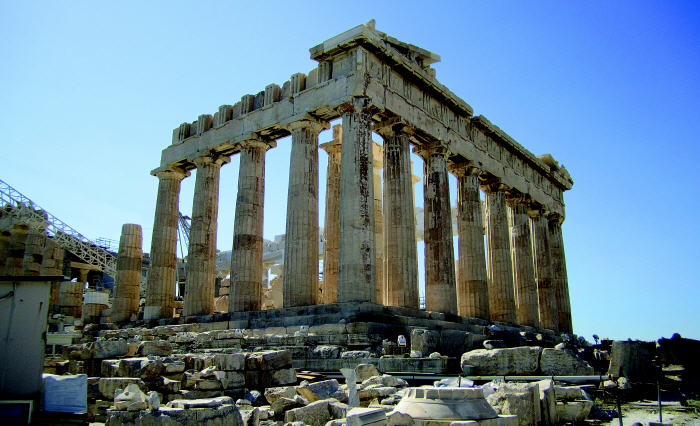 The Parthenon, dedicated by the Athenians to Athena Parthenos, the patron of their city, is the most magnificent creation of Athenian democracy at the height of its power. Built between 447 and 438 BC, the Parthenon is regarded as an enduring symbol of Ancient Greece and western civilization. It is one of the world’s greatest cultural monuments and one of the top tourist attractions in Athens. 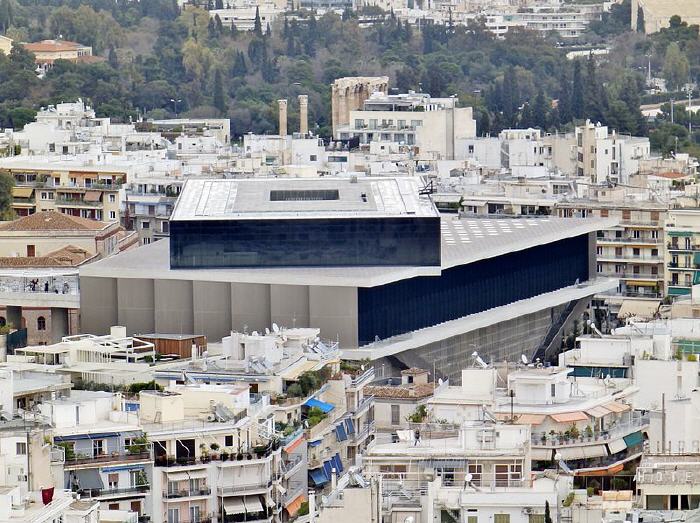 Another one of the top tourist attractions in Athens is the New Acropolis Museum, which is also one of the most important contemporary works of architecture in Athens. It was designed by architect Bernard Tschumi with Michael Photiadis and inaugurated in the summer of 2009. Located in Makryanni just below the Acropolis, it houses 4,000 artifacts from the Acropolis monuments and is easily accessed from the Acropolis station of the Metro. 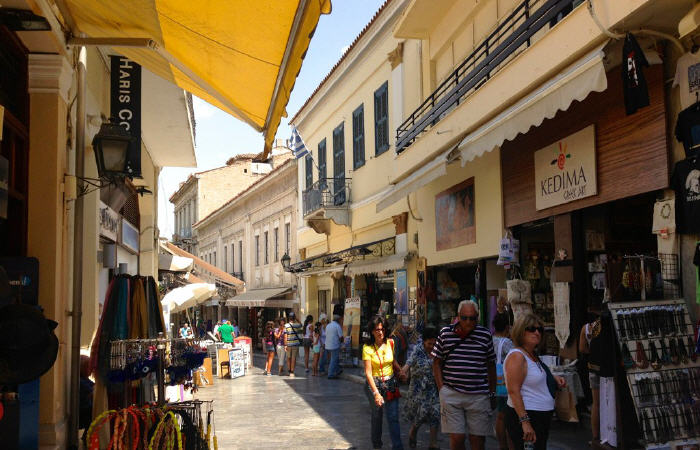 Plaka is Athens’ oldest district and has been inhabited continuously since antiquity. Walking through the narrow labyrinthine streets lined with houses and mansions from the time of the Turkish occupation and the neoclassical period (19th c.) you encounter more ancient monuments, scores of Byzantine churches and remnants of the ottoman buildings such as mosques, a Turkish bath, a Muslim Seminary. Being one of the top tourist attractions in Athens, Plaka is well-known for its food, boutique shops and cafes. There are also some interesting museums, lots of picturesque tavernas, cafes, bars, as well as shops selling souvenirs and traditional Greek products.

The National Archaeological Museum is the largest museum in Greece and one of the world’s greatest. Its original purpose was to secure all the finds from the nineteenth century excavations in and around Athens. However, it gradually became the central National Archaeological Museum and was enriched with finds from all over Greece. It has more than 11,000 exhibits and provides a panorama of Greek civilization from the beginnings of Prehistory to Late Antiquity. This is one of the top tourist attractions in Athens which you must not miss, especially if you love art exhibitions. 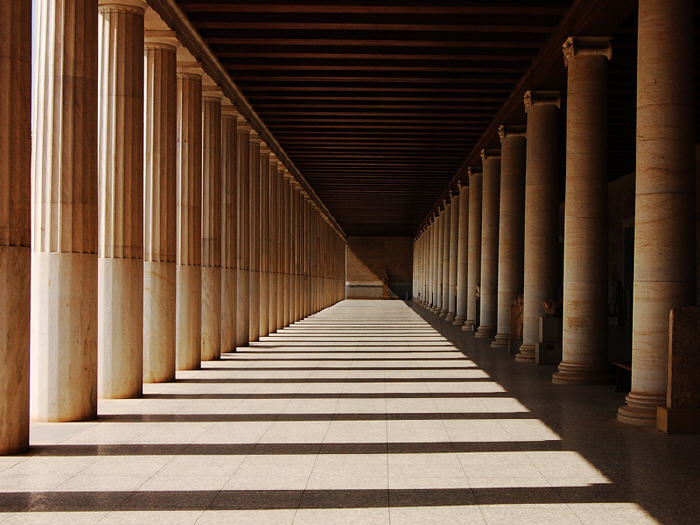 Located to the northwest of the Acropolis, Ancient Agora of Athens used to be the marketplace and civic center; it was where people gathered to buy and sell all kinds of commodities. Ancient Agora was also a place where people assembled to discuss all kinds of topics: business, politics, current events, or the nature of the universe and the divine. It was the place where ancient Greek democracy was born. 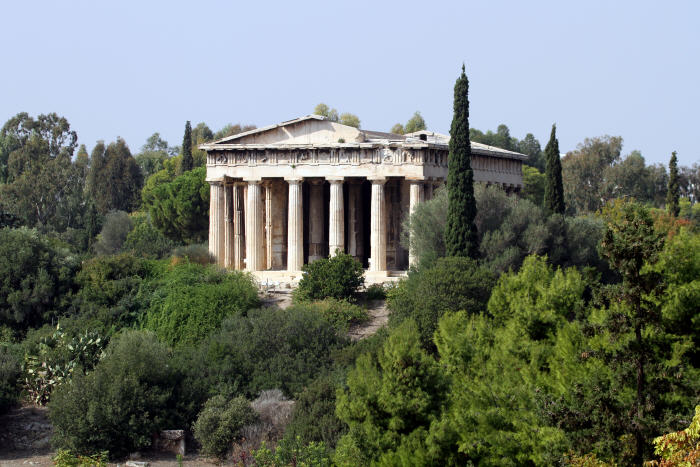 Sitting on top of the Agoraios Kolonos hill in Ancient Agora is the Temple of Hephaestus, the best preserved ancient Greek temple built in the 5th century BC. Museum of the Ancient Agora is housed in the Stoa of Attalos, and the collection of the museum includes clay, bronze and glass objects, sculptures, coins and inscriptions from the 7th to the 5th century BC, as well as pottery of the Byzantine period and the Turkish occupation. 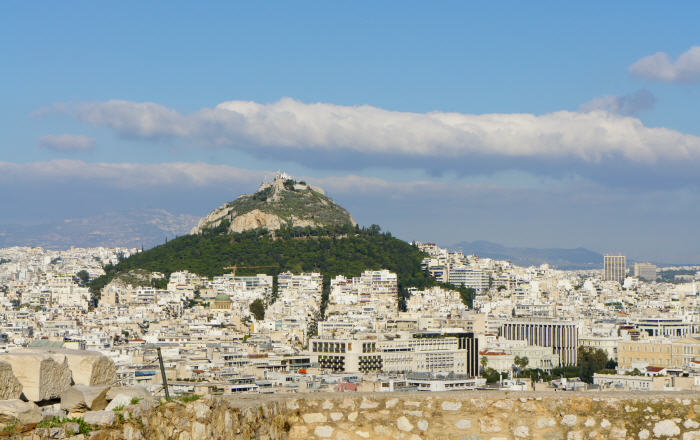 Mount Lycabettus, also known as Lycabettos, Lykabettos or Lykavittos, is a Cretaceous limestone hill in Athens. At its two peaks are the tiny white-stuccoed chapel of St. George and a café. A twilight romantic adventure for couple starts with a hike up the hill at the end of Aristippou Street in Kolonaki. Or you can opt for the funicular which leaves at the top of Ploutarchou street in Kolonaki and costs 2 euros each way. Standing high above Athens, Lycabettus offers a clear view across the Attica basin and the Aegean. 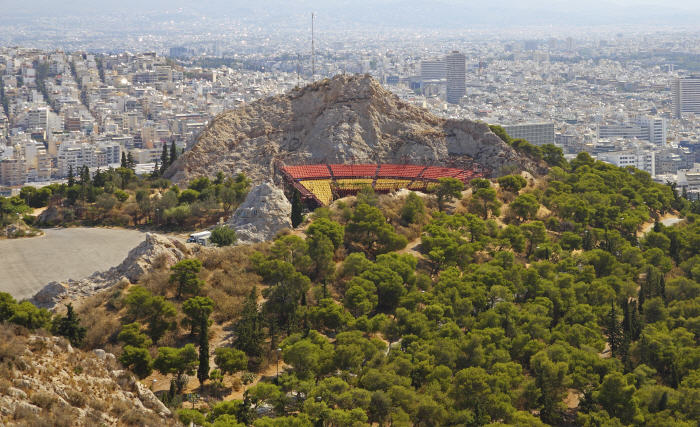 Lycabettus also has a large open-air amphitheatre at the top, which has housed many Greek and international concerts. 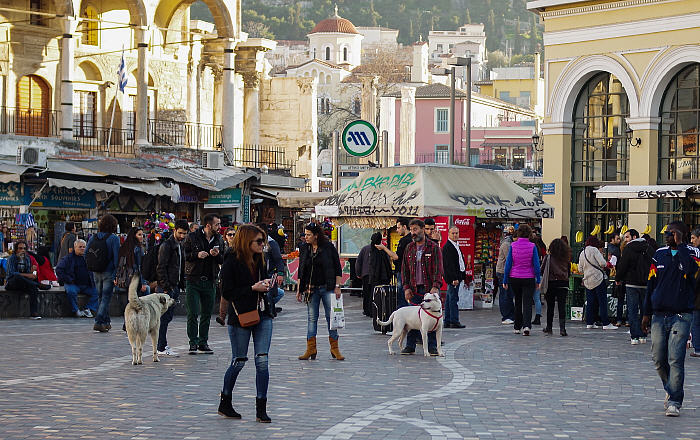 Monastiraki is one of the principal shopping districts in Athens. The area is home to clothing boutiques, souvenir shops, and specialty stores which are open during normal hours and you can come here anytime. It is one of the top attractions in Athens and Attica for bargain shopping. The main streets of this area are Pandrossou Street and Adrianou Street. On Sunday, Monastiraki turns into sorta flea market as people set up tables and carpets to sell all kinds of stuff from antiques to what you might call useless junk. You might want to get here early as it becomes impossible to navigate in the crowd after 11am. If you want to take a break, there are many cafes and restaurants in the area. 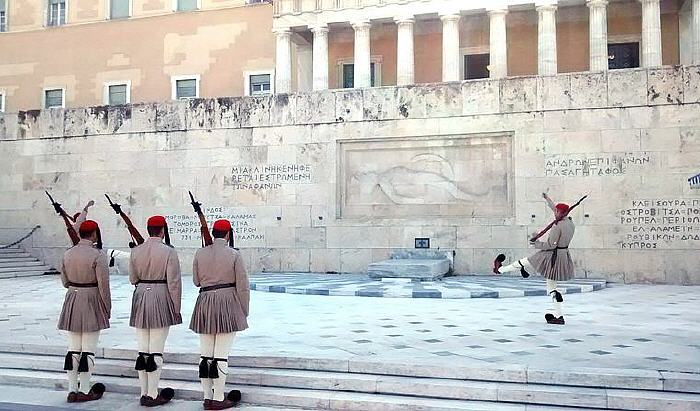 It is said that if you can find Syntagma Square, you can find your way to anywhere you want to go in Athens. Syntagma Square is a hub for many forms of public transportation in Athens. Athens Metro stops at the Syntagma station, under the square. The Athens Tram stops here too. Buses or trolley-buses are available to many places in the city. In addition, the square is located within walking distance to many of oldest and most famous neighbourhoods, and top tourist attractions in Athens. A popular aspect of Syntagma Square is the hourly changing of guards by the Evzones in front of the Tomb of the Unknown Soldier. 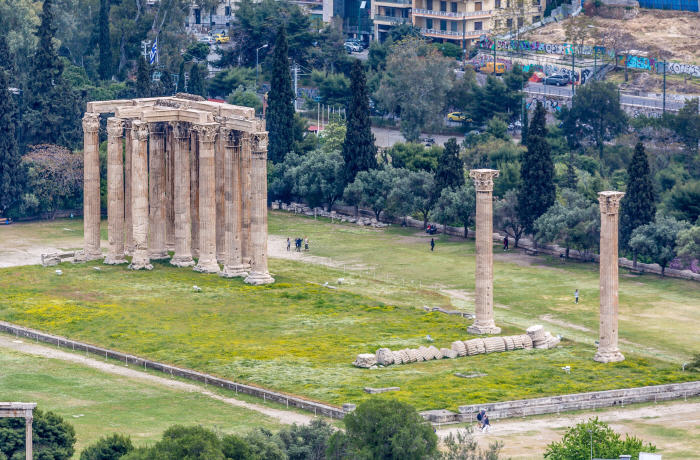 The Temple of Olympian Zeus is renowned as the largest temple in Greece. Construction began in the 6th century BC during the rule of the Athenian tyrants, but was not completed until the reign of the Roman Emperor Hadrian in the 2nd century AD some 638 years later. There were originally 104 Corinthian columns, each 17 meters high. Only 15 columns remain standing today. Despite this, the Temple of Olympian Zeus continues to be one of the top tourist attractions in Athens. 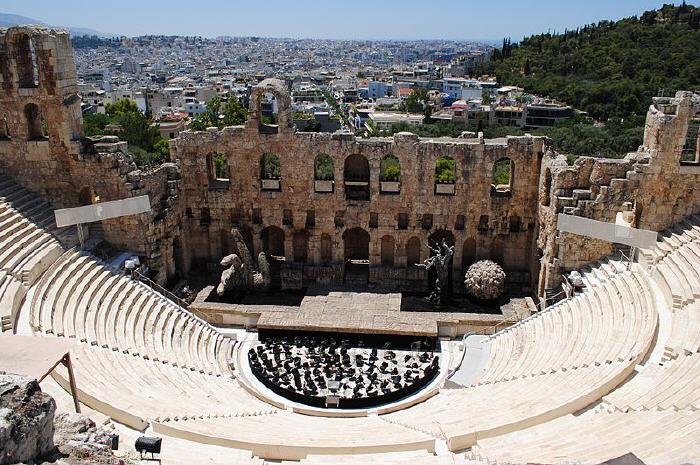 The Odeon of Herodes Atticus is a stone theatre structure located on the southwest slope of the Acropolis of Athens. It was built in 161 AD by the Athenian magnate Herodes Atticus in memory of his wife, Aspasia Annia Regilla. Originally a steep-sloped theater with a three-story stone front wall and a wooden roof made of cedar of Lebanon timber. It was used as a venue for music concerts with a capacity of 5,000. It lasted intact until it was destroyed and turned into a ruin by the Heruli in 267 AD. In the 1950s, the audience stands and the stage were restored using pentelic marble. Since then it has been the main venue of the Athens Festival, which runs from May through October each year, featuring a variety of acclaimed Greek as well as International performances. It has also become one of the top tourist attractions in Athens. 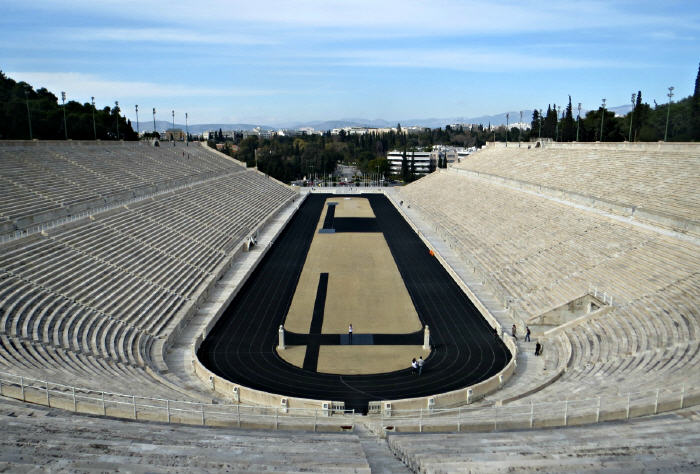 The Panathenaic Stadium hosted the first modern day Olympic Games in 1896. It is also the ending point for the Athens Classic Marathon, which is deemed as one of the marathons worth traveling the world for. The Panathenaic Stadium, also known as the Kallimármaro (meaning the “beautifully marbled”), is a multi-purpose stadium used for several events and athletics in Athens. Reconstructed from the remains of an ancient Greek stadium, the Panathenaic is the only stadium in the world built entirely of marble and one of the oldest.

Athens is the perfect place for shopping! 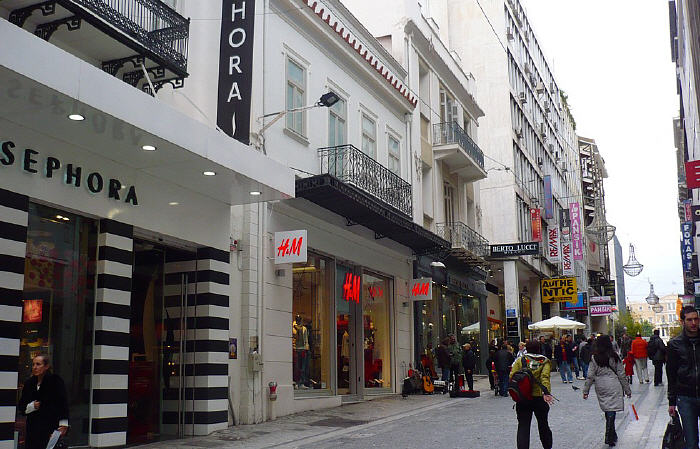 Besides visiting the top tourist attractions in Athens, its also about shopping! Take a stroll in the 2,500 shops in Ermou street. Kolonaki is the area where you will find many shops selling expensive brands and haute couture. Feel the cosmopolitan air of Voukourestiou street, one of the hippest and trendiest in Europe with the prestigious designer boutiques and the world renowned jewellery stores. Discover the bohemian chic shops of Exarchia selling clothes, old records, books, art and handmade jewellery.

Review score 8.5 and above, and with at least 40 verified reviews from real guests in Agoda and Booking who completed their stays.

Didn’t find what you are looking for? Search for more hotels listed in Agoda or Booking.com for Athens Greece.