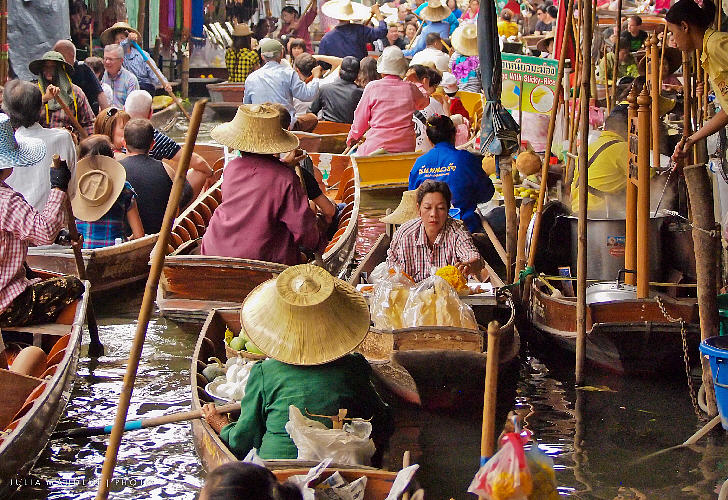 17 Places to visit in Bangkok – City of Angels

Bangkok, the capital of Thailand, is one of the most visited cities in the world and it isn’t really hard to know why. Known to the Thais as “Krungthep”, which means the City of Angels, it is one of Asia’s most cosmopolitan cities with action on every corner: Marvel at the gleaming temples, catch a tuk tuk along the bustling Chinatown or take a longtail boat through floating markets. Food is another one of its highlights, from local dishes served at humble street stalls to haute cuisine at romantic rooftop restaurants, Bangkok has something for everyone and truly never ceases to amaze you.

Like other modern cities in the world, Bangkok boasts lots of massive buildings, numerous luxurious hotels and shopping malls. Yet it retains its traditional charm; a beautiful mixture of East and West, the ancient and the modern. Thus, despite of its modernization, Bangkok gives you a wonderful glimpse of the traditional arts, architecture, religion, and other aspects of the culture of the Thai people. Below are 17 places to visit in Bangkok where you can experience the traditional charm and the culture of the Thai people.

Two of the places to visit in Bangkok are located in the same compound in the heart of Bangkok. Grand Palace and Wat Phra Kaew are most frequently visited by tourists and local people alike. The Grand Palace is famous for its impressive buildings. Wat Phra Kaew is renowned as the most beautiful and important Buddhist temple in Thailand. It houses Phra Kaew Morakot, the highly revered Buddha image meticulously carved from a single block of jade. It is so richly and intricately decorated that once entering the temple, visitors will feel as if they were in a real “city of angels.”

The biggest golden teakwood building in the world. It was built in 1901 by King Chulalongkorn the Great (Rama V) as a royal residence. Located behind the old National Assembly Building, it was the private museum of the late king where priceless treasures and a collection of the king’s memorabilia are displayed.

Or Wat Phra Chetuphon (Temple of the Reclining Buddha) was founded in the 16th century; the oldest and biggest temple with the largest number of pagodas (99 in all) in the cities. It is well known for its huge Reclining Buddha, 46 m. long and 15 m. high. It is also the birthplace of traditional Thai massage. Its famous Thai Traditional Medical and Science School and Body Massage is open daily from 0800 – 1700 hours.

Wat Arun or Temple of Dawn, situated on the west (Thonburi) bank of the Chao Phraya River, is attractive in its striking pagodas which are decorated with millions of pieces of Chinese porcelain and stands majestically over the water. Its central pagoda, at a height of a 20-storey building, is the tallest pagoda of Thailand where you can get a bird-eye view of the nearby surroundings.

Wat Arun is almost directly opposite Wat Pho, so it is very easy to get to. From Sapphan Taksin boat pier you can take a river boat that stops at pier 8. From here a small shuttle boat takes you from one side of the river to the other for only 3 baht. Entry to the temple is 100 baht. The temple is open daily from 08:30 to 17:30.

Wat Benchamabophit Dusitvanaram is a Buddhist temple located at Rama 5 Road, Chitlada in the Dusit district of Bangkok, Thailand. Also known as the Marble Temple where you will find the relics of King Rama V. It is one of Bangkok’s most beautiful temples, thanks to its traditional Thai symmetrical architecture designed by Prince Naris, a son of King Rama IV and one of the greatest architects during his time.

A major tourist attraction and one of the most modern works of Thai religious architecture. Graceful and tranquil, it is famous for its main chapel built in white Carara Italian marble to house a replica of Thailand’s most beautiful Buddha image, Phra Phutthachinnarat. Visit the temple in the early morning to see local people offering alms to the monks according to Thai traditional folkway.

Opened by King Rama V to exhibit the antiques and gifts bestowed to him by his father, it once held a reputation for being an ill-organised gathering of dusty relics. That has now changed, with exhibits now arranged into three areas consistent with Thai history, and good English-language descriptions available.

Another one of the places to visit in Bangkok is Wat Traimit, which is located at the end of Chinatown’s Yaowarat Road, near Hua Lamphong Railway Station. Wat Traimit houses the world’s largest massive gold seated Buddha measuring nearly five metres in height and weighing five and a half tons. In the past, artisans crafted the Buddhas in gold and disguised them from invading armies by a covering of stucco and plaster. It was accidentally discovered during a move when the ropes broke and the statue fell hard on the ground chipping off some of the plaster, allowing the gold surface underneath to be seen.

When all the plaster was removed, it was found that the gold statue actually consisted of nine parts that fit smoothly together. A key was also found encased in plaster at its base, which can be used to disassemble the statue, allowing for easier transportation.

Wat Suthat, better known for the towering red Giant Swing that stands at its entrance, is one of the oldest and most impressive temples in Bangkok. It features an elegant chapel with sweeping roof, magnificent wall murals and exquisite hand-carved teakwood door panels.

The temple’s construction was commissioned by King Rama I (1782-1809), to shelter the 13th Century bronze Buddha image transported by boat from Sukhotai, but it was finally completed during King Rama III’s reign (1824-1851). Located in the Old City area, just east of the Royal Field, you can easily combine a visit to Wat Suthat with Wat Phra Kaew (Temple of the Emerald Buddha), Grand Palace and Wat Pho.

Located on Ratchadamnoen Klang Road, near Wat Ratchanadda, it is an interactive self learning centre with state-of-the-art multimedia technologies giving information on history, arts and culture of the Rattanakosin era (since 1782).

There is no sky train or metro station nearby, so the easiest way to get there is either by taxi from Hua Lamphong (15 minutes if no traffic) or take the boat from Sapphan Taksin to Tha Thien Pier (number 8) and take a Tuk Tuk.

Located opposite to MBK Center, it displays a wide variety of art works including Thai and international contemporary art. Inside, the spiral staircase conveniently leads visitors to appreciate the works that are exhibited in each floor of this 9-storey building. The centre features areas for arts of all media, theatres, multipurpose rooms, and a library.

Located at corner of Henri Dunant Road and Rama IV Road, a trip to snake farm will be exciting and very educational for both children and adults. The world’s second oldest of its kind. Visitors can see the extraction of venom and walk through the breeding and holding areas to see the venomous snakes close at hand. The demonstration of snake handling starts at 1430 on weekdays and 1100 on weekends. The venom-milking starts at 1100 on weekdays. If you are not afraid of snake, don’t miss the snake farm at the Queen Saovabha Memorial Institute.

One of the other places to visit in Bangkok is the Chatuchak Weekend Market. Among the largest markets in the world, it is divided into 27 Sections, contains more than 15,000 booths selling goods from every part of Thailand. Chatuchak Weekend Market has over 200,000 visitors each day (Saturday-Sunday) of which 30% is foreigner. There are almost everything can be found here at a bargaining local price (not a tourist price), and most vendors actually come from local factories.

You can find antique wood carving, clay handicrafts, local souvenirs from every parts of Thailand, Buddhist amulets, wooden furniture, handmade decorated flowers, plant, ceramic wares, Thai Benjarong, Chinese wares, decorated plants, stones, trendy fashions, silk, hill-tribe outfits, fluffy dogs etc. You are recommended to spend a full day as there’s plenty to see, do and buy. It is also advisable to go early, ideally around 9am to 10am, to beat the crowds and the heat.

Hop on the skytrain (BTS) to Mo Chit station, take exit no. 1 and follow the crowd until you see rows of canvas stalls selling clothes. Turn right while continuing to follow the crowd and you will see a small entrance that leads into the market (clothing section).

Another option is to take the subway (MRT) to Chatuchak Park station (exit no.1), then follow the crowd until you arrive at the small entrance that leads into the market (clothing section). For the plant and flower section, get off at Kampheng Phet MRT station (exit no. 1).

Located on 6 Rai on Sri Ayudhya Road, the palace was first opened to the public by the late Princess Chumphot of Nagara Svarga in 1959. There are 8 traditional Thai houses, lacquer pavilions and collection of ancient artifacts from the era of H.R.H. Prince Paribatra Sukhumbandhu, son of His Majesty King Chulalongkorn, Rama V and Her Majesty Queen Sukhumala Marasri.

Located in the compound of the Siam Society on Asok Road (near MRT Sukhumvit Station), this authentic northern Thai teak house was built in Chiang Mai in 1848. It was moved in perfect condition to Bangkok in 1963 and later turned into a museum. On display are equipment and tools used daily by farmers and fishermen in the North.

Located on Thiam Ruam Mit Road, opposite Thailand Cultural Centre, Siam Niramit features modern Thai cultural performances with special techniques that are of international standards in a luxurious theatre with a capacity of more than 2,000 seats.

During the shows, staged by over 150 performers in wonderful costumes, all spectators will be taken to the lands beyond imagination influenced by Thai literature and Thai common beliefs. The shows also include the history of each region of Thailand and the country’s arts and cultural heritage.

Located on B1 and B2 of Siam Paragon (BTS skytrain: Siam Station), the gigantic luxurious shopping mall in Bangkok, is Siam Ocean World, one of Southeast Asia’s largest aquariums (approximate 1,000 sq m) which exhibits over 30,000 native and exotic marine life in seven different zones — Weird and Wonderful, Deep Reef, Living Ocean, Rainforest, Rocky Shore, Open Ocean and Sea Jellies. The whole family will be amazed with the underwater experiences, daily feeding shows, a 4D theatre or be excited with “Dive with the Sharks Programme.”

* Please book in advance, as it could be busy on holidays.

Another one of the places to visit in Bangkok and simply not to be missed is the floating market. The largest and most popular one is Damnoen Saduak Floating Market, located about 80 km southwest of Bangkok in Ratchaburi province. If you are in Bangkok, situated in front of the Talingchan District Office in the west of Bangkok and has yet to be converted into a full scale tourist attraction is the charming Taling Chan Floating Market. Here you can spend a good half day on weekend without having to book a tour and it is far more genuine than the big famous markets. The best time to visit the market is the early morning, as early as possible so as to avoid most tourist crowd and before the produce is sold out.

Start planning your trip and get ready to fully immerse yourself in the traditional arts, architecture, religion, and other aspects of the culture of the Thai people with these 17 places to visit in Bangkok.

Top hotels and other accommodations in Bangkok

Have a property in Bangkok? List your property on HomeAway and get 40 GBP off using the code HAUKAFF40