Phuket, the Pearl of the Andaman, is the most prominent tourist attraction of Thailand in the south. It is the biggest island of Thailand located in the Andaman Sea. With its magnificent long white beaches, its crystal-clear waters, its fantastic underwater scenery, and fresh seafood, Phuket entices many travellers to visit her again and again. This list of the 10 must see attractions in Phuket for your first visit offers the pick of the island’s diverse range of sights and experiences. Just seeing a few of them will guarantee a memorable stay and will surely make you eager to return and tick off the rest.

Must see attractions in Phuket for your first visit Phang Nga Bay is one of the most beautiful bays of Thailand between Phuket, Phang Nga and Krabi. Famous for its gravity-defying limestone formations over emerald-green water, a trip to Phuket will not be complete without a leisurely day trip in Phang Nga Bay. If you are adventurous enough, you can have an up-close exploration of the dramatic limestone cliffs in a sea-canoe. Sea-canoeing is a popular activity in the Phang Nga Bay as it allows you to see more than anyone else of the area, as many mangrove swamps and island grottoes are only accessible by canoe. 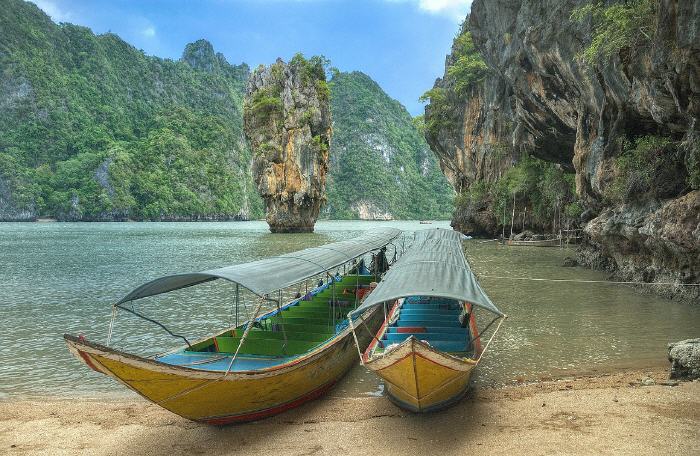 Two of the more famous spots in this bay are the James Bond Island, as seen in the James Bond movie The Man with the Golden Gun, and Koh Panyee, a fishing village built on stilts. The two best ways to enjoy the spectacular scenery are from boats or from the small beach on Koh Ping Ghan. If you want to have more freedom, you can rent a long-tail boat from Surakul Pier in Phang Nga, which can carry up to ten people for a good three to four hours. Old Phuket Town takes you on a historical journey back to the days when it was dubbed ‘Junk Ceylon’ and made a fortune out of tin. It was built on riches reaped from Phuket’s tin boom of last century, when the metal was an extremely valuable commodity. Old Phuket Town is noted for Sino-Portuguese buildings on both sides of the street. Many historic buildings have been converted into shops, hotels, restaurants and museums. It is compact enough to stroll around in. You are recommended to do this early in the morning or in the evening when it is cooler.

The main street of Old Phuket Town is Thalang Road and every year in February there is an Old Town festival held in Thalang Road. The nightlife of Bangla Road is a party heaven road lined with Phuket’s top nightclubs, bars and adult entertainment venues, with big crowds visiting every night of the year. The road is closed to motor vehicles. Bangla road transforms into one big open bar, full of neon lights, beautiful dancing girls, loud music, flashy shops and cheap beer. Almost all of the bars are outdoors, so the music from each one blends into a deafening fusion! If you like to party, have an open mind and a good sense of humour, this is the perfect place for you. 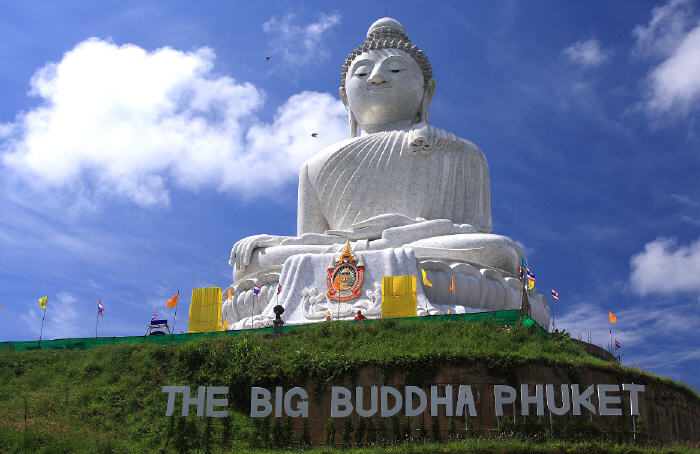 Sitting atop the Nakkerd Hills on a patch of virgin rainforest high above Phuket City and visible from many places across the south of the island, the serene and 45-metre Ao Chalong Big Buddha will wow you even from a distance. Close up, it’s quite overwhelming. The 360-degree views from the hill are among the best in Phuket, taking in Phuket Town, Chalong Bay, Rawai, Kata, Karon and out across the sea. It is one of the popular attractions in Phuket for tourists as well as locals, and one of the most important and revered landmarks. The official name for the Big Buddha is Phra Putthamingmongkolekanagagiri.

The project is funded entirely by donations. For Thai Buddhists, this is a form of merit-making. You have the option to donate 100 Baht for the smallest marble tile.

How to get there: The road leading up to the Big Buddha is off Chao Fa Road East near Chalong. There are many red-and-white signs indicating where it is. Turn down Soi Yodsane and simply follow the indications for the next six kilometres up the hill. Wat Chalong is the largest and most popular of Phuket’s 29 buddhist temples. The beautiful, intricate designs of its buildings include several pagodas decorated with hundreds of tiny glass pieces, making them glitter in the bright sunlight. It is dedicated to two highly venerable monks, Luang Pho Chaem and Luang Pho Chuang who used their medical skills and authority to assist during the Tin Miner’s Rebellion of the 19th century. Thai tourists visit here in great numbers, often to make decisions or receive lucky numbers. You can do as they do, but be sure to make a donation, and dress modestly. 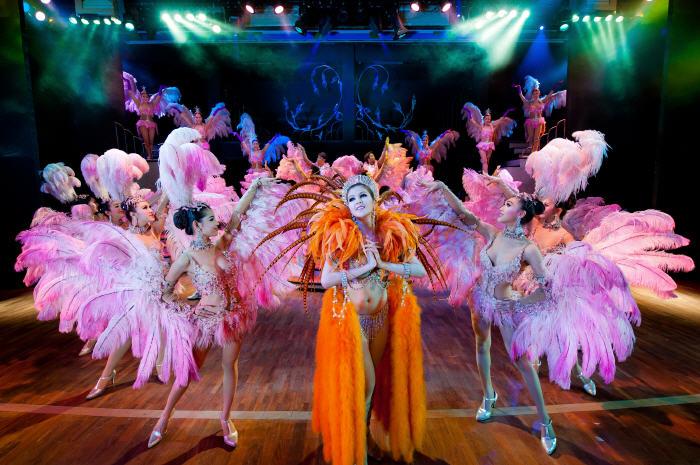 The Simon Cabaret Show is the biggest and best of the choices in Phuket. The show promises to blow your mind away featuring skillful dancers in stunning costumes, great music, and light system.

The Simon Cabaret show is suitable for all ages and is therefore perfect for family, couples or even an all-girls groups, thus making it one of the popular attractions in Phuket. It is not just entertaining but thrilling as well. They perform everything from dancing and singing. The series of music played is good and soothing too. Another one of the popular attractions in Phuket is the Phi Phi Islands. It is a beautiful archipelago of six islands in Krabi Province, Southern Thailand and just a short ferry ride away from Phuket. It came to worldwide prominence when Ko Phi Phi Leh was used as a location for the 2000 British-American film The Beach starring Leonardo DiCaprio. The islands, when approached by boat, rise from the sea like a fortress. Sheer cliffs tower overhead, then give way to beach-fronted jungle. Its emerald clear water has attracted thousands of holiday-makers. Another point worth mentioning is Monkey Bay where colourful fish will surround and play with you while you are snorkelling. 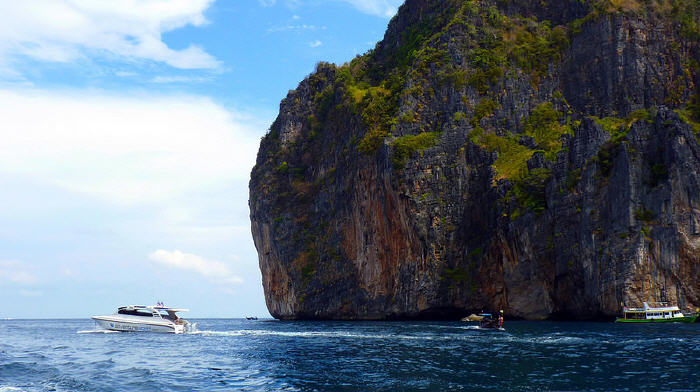 The Phuket FantaSea is a stunning 140-acre theme complex the whole family can enjoy. One of the popular attractions in Phuket, it is packed with a carnival village with games, handicrafts, shopping, and a breathtaking Las Vegas-style theatrical show of Thailand’s exotic myths, mysteries and magic. I had no idea what to expect before the show started but the hour long highly-entertaining extravaganza totally blew my mind away. Over 400 casts, including elephants, tigers, goats, chickens, pigeons, and crew members work together each night to put up a spectacular show with song and dance, acrobats, and fireworks.

The grand circus-like site also hosts one of the biggest buffet dinners in Asia. Two ticket types are available, either show with dinner (Adult THB 2,200), or show only (Adult THB 1,800). Phuket is truly blessed when it comes to natural beauty, with almost every metre of coastline offering incredible views of gorgeous beaches or dramatic cliffs. One of these includes the well-known Phromthep Cape at the very southern tip of the island. Sometimes called Laem Phra Chao or God’s Cape, Phromthep gives you a breathtaking panorama view of the surroundings and the striking sunset. Recommended time to be at the cape from around 17:30 hours onward from December to February, and from around 18:00 hours onnward from March to November. Another is the Karon Viewpoint (previously called Kata viewpoint) between Kata Noi and Nai Harn beaches, which offers a panoramic view of Kata Noi, Kata and Karon beaches. It is better visited in the morning than the evening as the view is clearer. 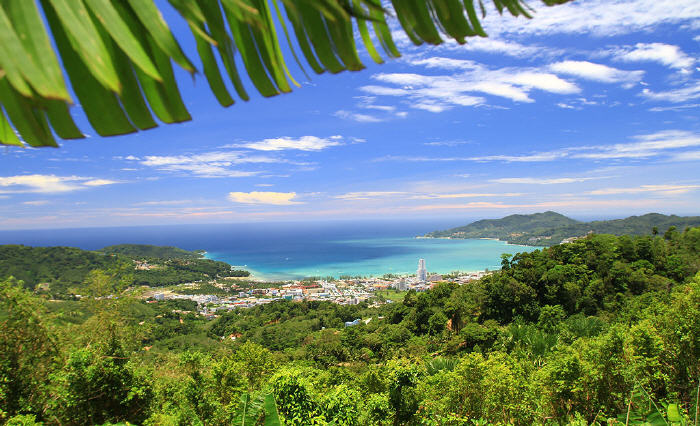 Radar Hill Viewpoint is the highest in Phuket and probably one of the least accessible of all the viewpoints on Phuket. Towering above Patong, this viewpoint offers views of Patong but more impressively of Chalong and Phuket Town. Accessible only from the east, the picturesque (and sometimes steep) road winds up through villages and rubber plantations.

Whether it is to watch headline bouts between super-fit fighters or to learn some of the skills for yourself, Phuket is a great destination. There are not only a number of stadiums where you can catch professional Muay Thai fighters in action, but there are also many training camps in Phuket that are open to all ages (usually from 13 years upward) and genders. It is an intense activity, both to watch and to train, and it is a well worth experience.

Going to Phuket? You may also be interested in the Phuket Vegetarian Festival, October 2016 (actual dates to be confirmed) The Phuket Vegetarian Festival is an annual event held during the ninth lunar month of the Chinese calendar. It is believed that the vegetarian festival and its accompanying sacred rituals bestow good fortune upon those who religiously observe this rite. During this time, local residents of Chinese ancestry strictly observe a 10-day vegetarian or vegan diet for the purposes of spiritual cleansing and merit-making. Sacred rituals are performed at various Chinese shrines and temples and aesthetic displays such as walking barefooted over hot coals and ascending ladders with bladed rungs are performed by entranced devotees known as “Ma Song”.