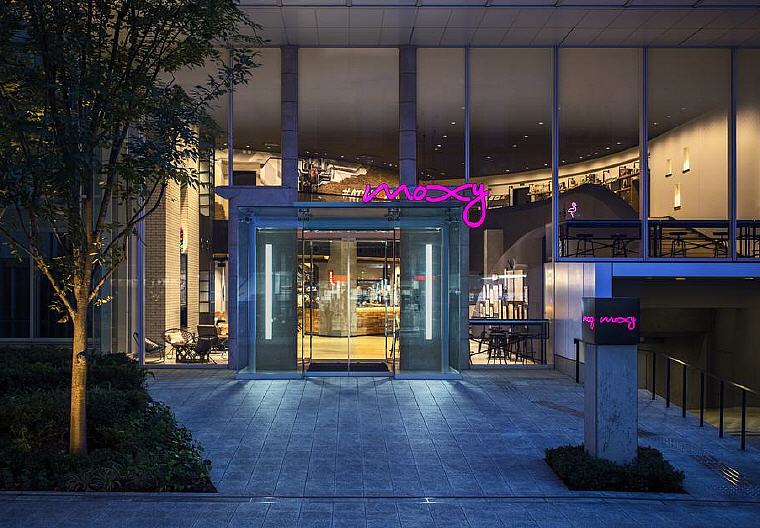 My first trip to Osaka was back in 2005 for 3 days 2 nights only. I remembered visiting Osaka castle, some shrines and Universal Studio. While planning for my Osaka trip in 2018, I chanced upon MOXY Osaka Honmachi by Marriott. I was mesmerised by the photos I saw in the website; the photos show a hip, vibrant, clean and trendy hotel.

The hotel is located about 5-10 minutes walk from the nearest metro station Sakaisuji Honmachi (K15/C17), which happened to be the two metro lines, Green line and Brown line. Look for exit 17 in the station which is the nearest exit to the hotel. 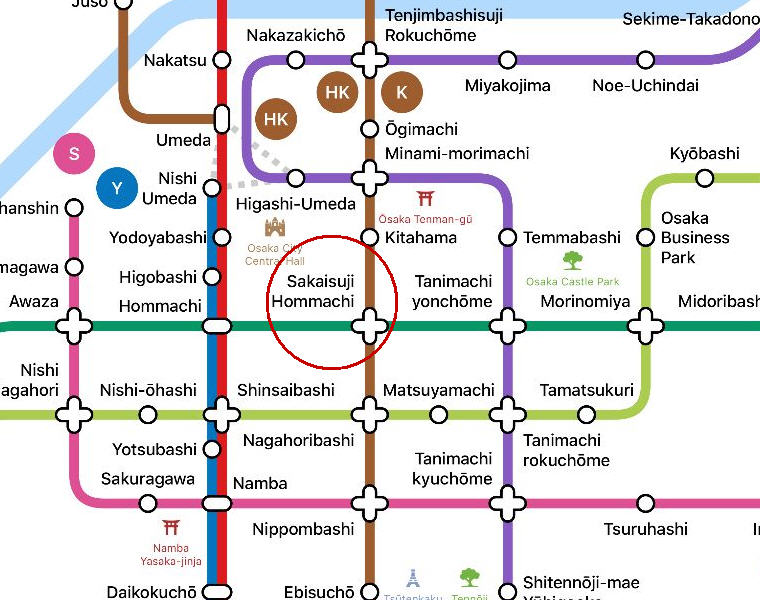 We arrived at MOXY Osaka Honmachi in the morning around 9 and were hoping that the room would be ready for check-in. However, as usual, there was no luck for early check-in; check-in time only starts at 3 in the afternoon. We left our luggage with the hotel and started our shopping. 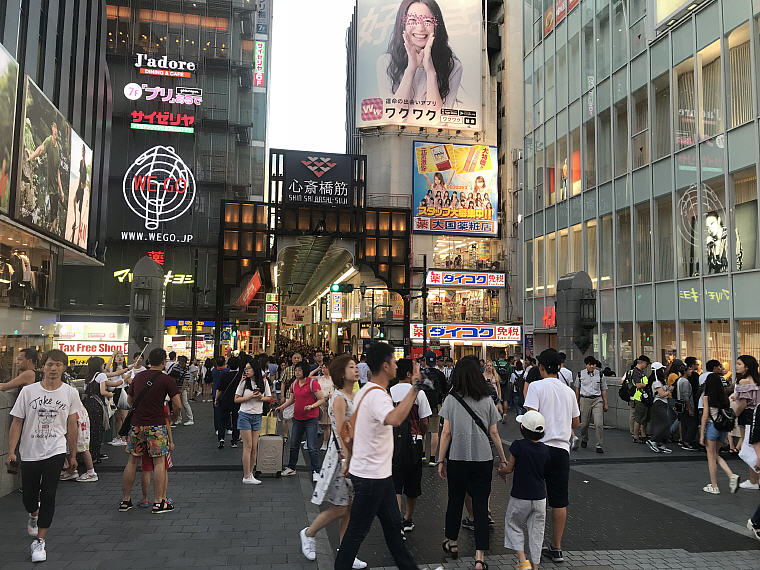 MOXY Osaka Honmachi is two stations away from the main shopping street, Shinsaibashi. 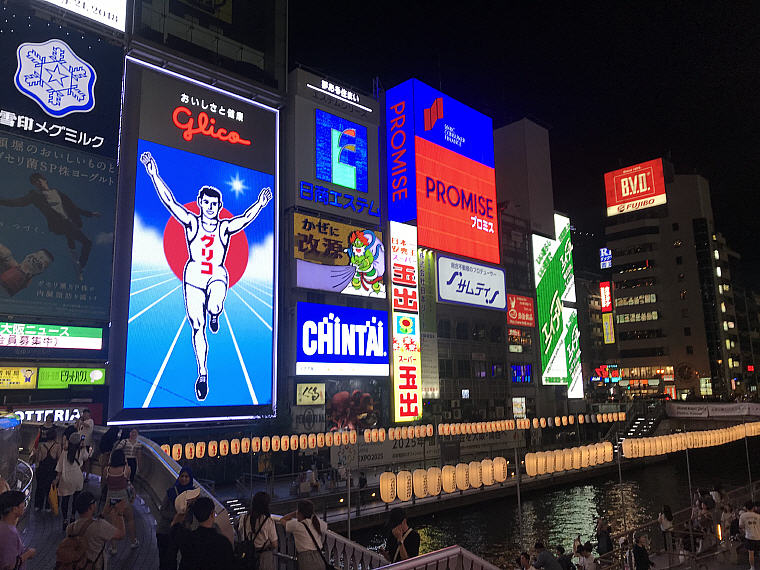 In addition, the hotel is around 35-40 minutes to Universal Studio via public transportation. 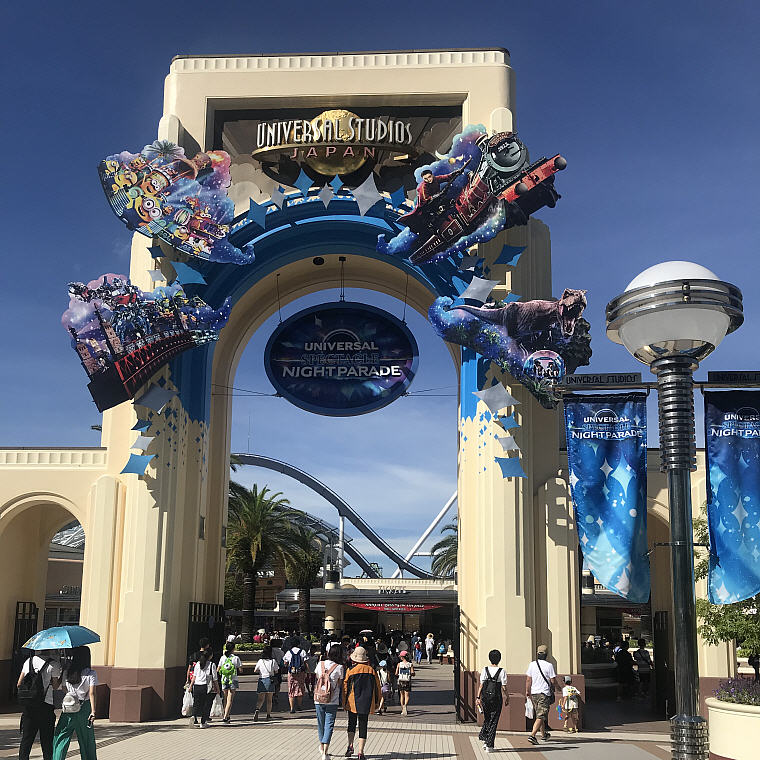 Done with our first round of shopping and lunch, we went back to the hotel for check-in. I could use the following words to describe MOXY Osaka Honmachi: trendy, cool, hip, vibrant, clean, neat, colorful, interesting, cosy, spacious, stylish, contemporary, modern, cheerful, retro, and pinky!


Pink seems to be their signature colour as you can be seen in their amenities such as hair dryer, toothbrush, shower, shampoo and hand soap as well as decorations.

There are 11 floors in this hotel and we stayed on the 10.


We were given one welcome drink voucher each, which we totally weren’t expecting it. Thank you MOXY Osaka Honmachi! 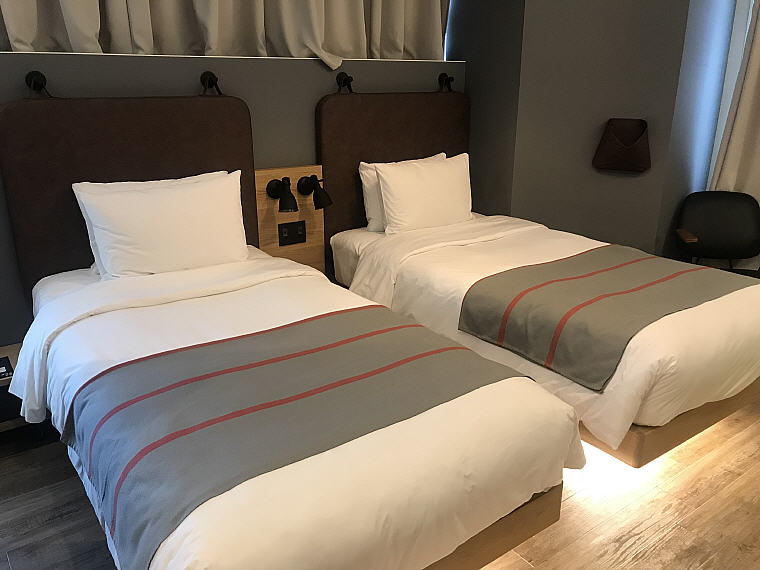 I like how the room is big enough to open the luggage right in front of the bed. 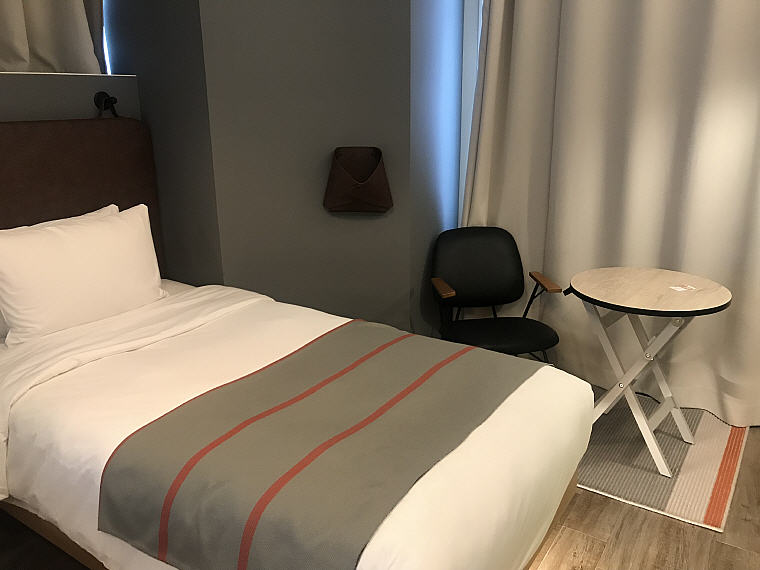 Ample space in the Twin Room

In most of the hotels I stayed in Japan before, all the room was so tiny with bed pushing towards the wall. If you need to pack or unpack, your luggage needs to be opened on the bed. Not only that, the walking space between the bed and the wall is so narrow that it is impossible for two persons to walk at the same time side by side. 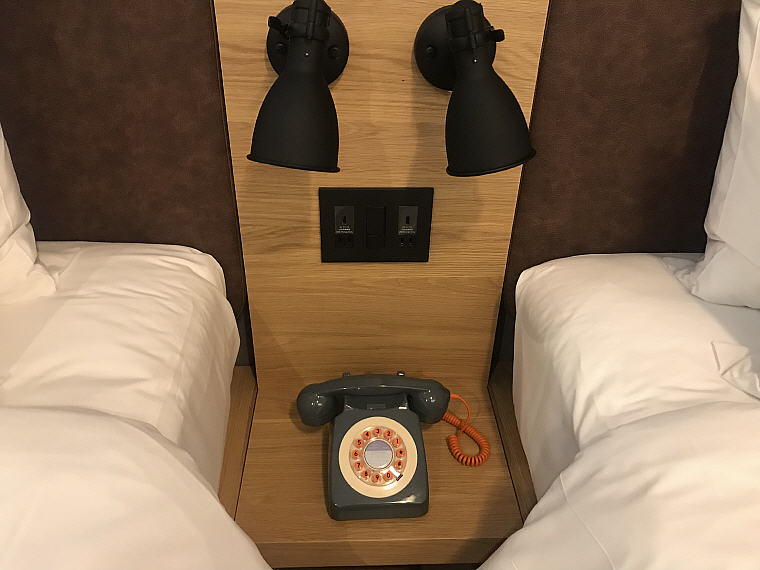 Retro Phone in the room

Even room card keys are unique and interesting! 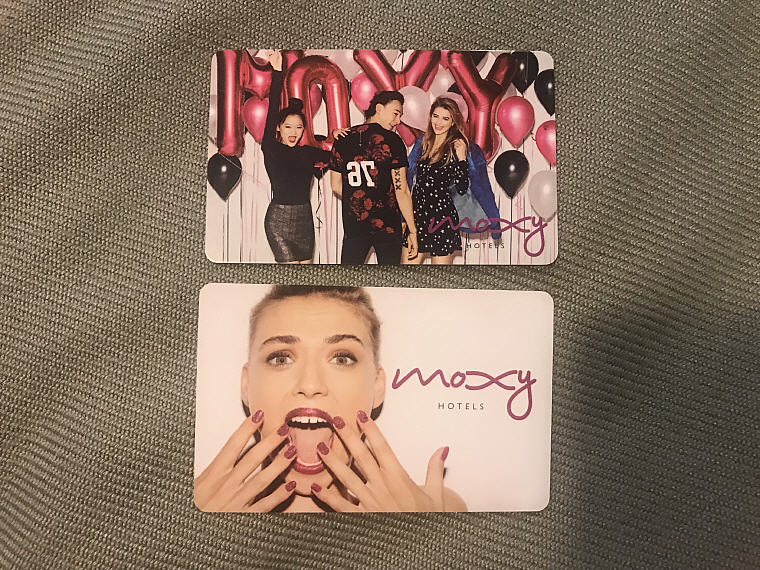 And for those who want to stay connected, you would be thrilled by the wifi speed!

MOXY Osaka Honmachi provides two bottles of mineral water daily. However, I was a little disappointed that there were no minibar and fridge in the room; guests would not be able to buy any snacks which need to be refrigerated.

In addition, there is no wardrobe in the room. Hangers to hang clothes are hung directly on the wall to save space as you can see in the photo, it doesn’t look odd at all. 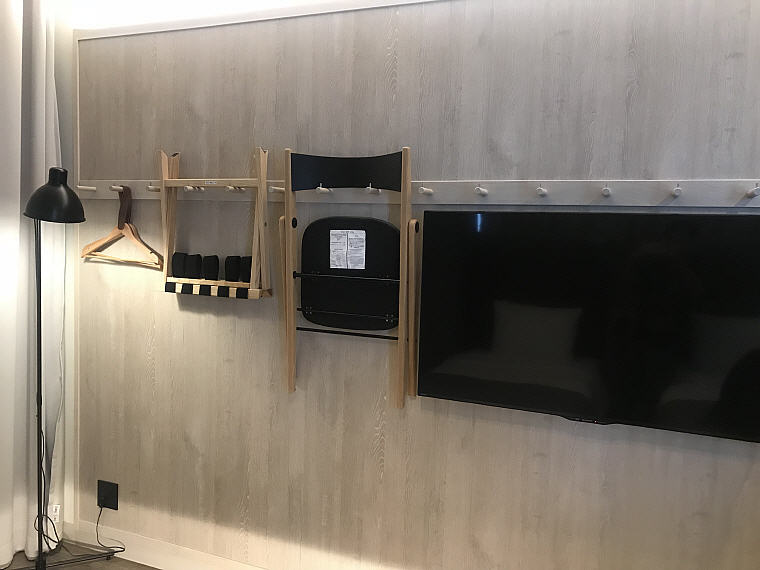 Hangers on the wall

The bathroom is nice with shower head and water tap in black. The mirror frame is also in black. In addition, there is a “seat” in the shower room just like how you shower in the onsen. I am thinking to have the similar concept for my bathroom renovation in Singapore.

As mentioned earlier on, our rate did not include breakfast. We paid JPY 1,300 per pax for breakfast for one of the days to see what MOXY Osaka Honmachi offers.

I think the unique feature about their breakfast is the Noodle Buffet, which are basically Udon and Ramen cooked on request. And you can have as many bowls as you like.


I understood that there is no specific role for each staff meaning anyone can be at Check-In this moment, and cooking Udon the next moment. The lady who you saw in one of the photos above at the Noodle Buffet also happened to be the person checking me in on the first day.

The rest of the dishes are pretty standard as what are offered in other Japan’s hotels. I just wish to mention that they were slow to top up the ice coffee and cut fruits as shown in the photo below.

There are plenty of seats in the breakfast area. The seats which you saw previously around the Hotel Reception may also be doubled up as seats for having your breakfast.

Surprisingly there is a gym in this hotel. I think it is thoughtful to have gym even though it is a small hotel. There is this bicycle, which is again in pink.

I happened to notice this separate room for ironing while heading to check up the gym. 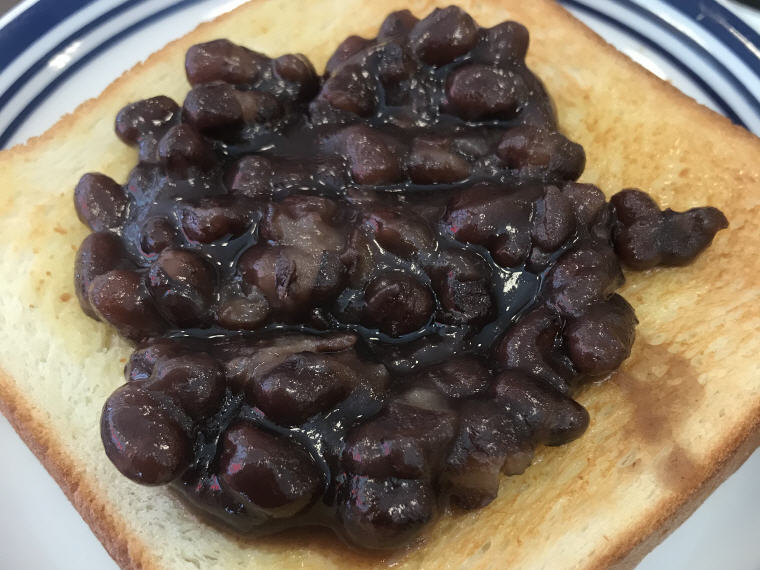 You can find drugstores, 7-11, Lawson, Cafés, and restaurants in Moxy Osaka Honmachi’s vicinity. On one of the nights, Kyoto and Osaka were hit by typhoon and fortunately we managed to get necessity from the nearby 7-11 and Lawson. 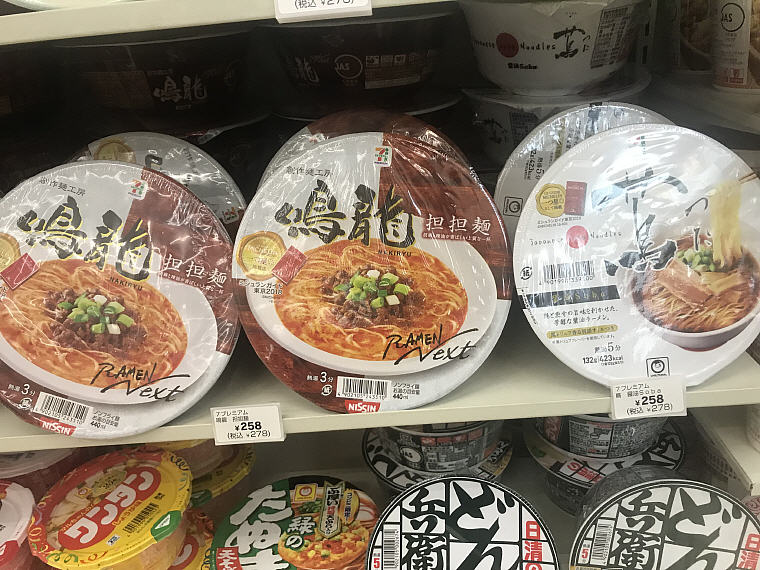 I received a survey email a few days after my check-out date. I feedback on the Iced Coffee, cut fruits, and bread not filled up fast enough and the hotel manager followed up promptly to request for more information since I mentioned that I have taken photos.

Would I recommend MOXY Osaka Honmachi by Marriott, Japan?

It is a sounding Yes! Both my friend and I concluded that the hotel is nice and will definitely come back or recommend to friends if ever they are visiting Osaka.

After Osaka, I have one night in Tokyo as I was flying back to Singapore from Tokyo. And guess what? I stayed in Moxy Tokyo Kinsincho, stay tune for the review of it!