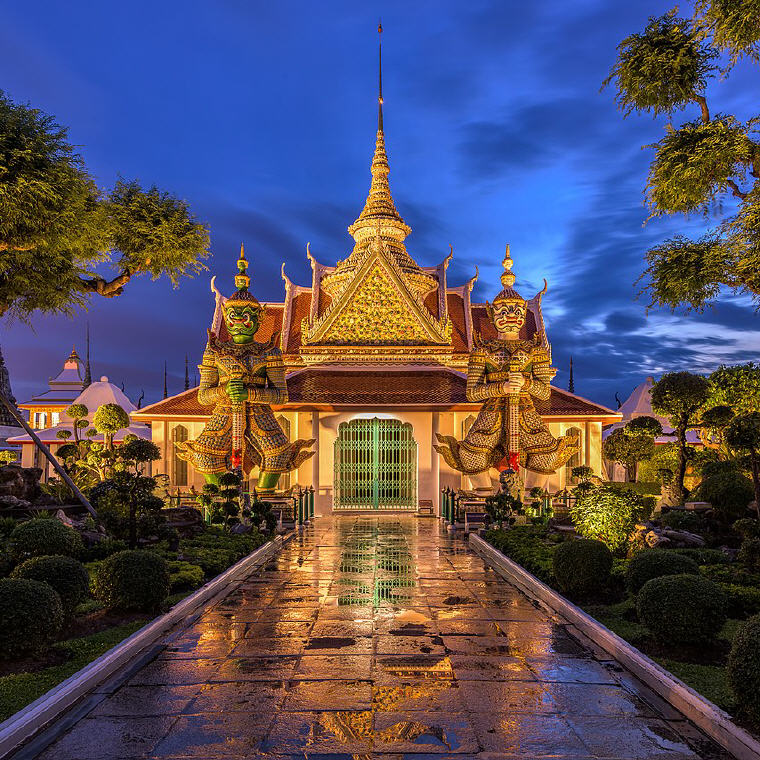 The sculptures of two mythical giant demons, Thotsakan (the green one) and Sahatsadecha (the white one), guarding the eastern gate of the ubosot, Credit: Wikipedia

There are two sides to every coin and Thai Baht coins are no exception. In addition to the picture of King Rama IX and the number that indicates the value, all the 6 Thai Baht coins (4 Baht coins and 2 Satang coins) depict some of Thailand’s most revered Buddhist temples.

Isn’t it wonderful that we can just flip a coin and get inspired by the local culture that’s hidden in plain sight? Now let’s find out more about the temples on Thai Baht coins, and explore Thailand in a new, unique way! 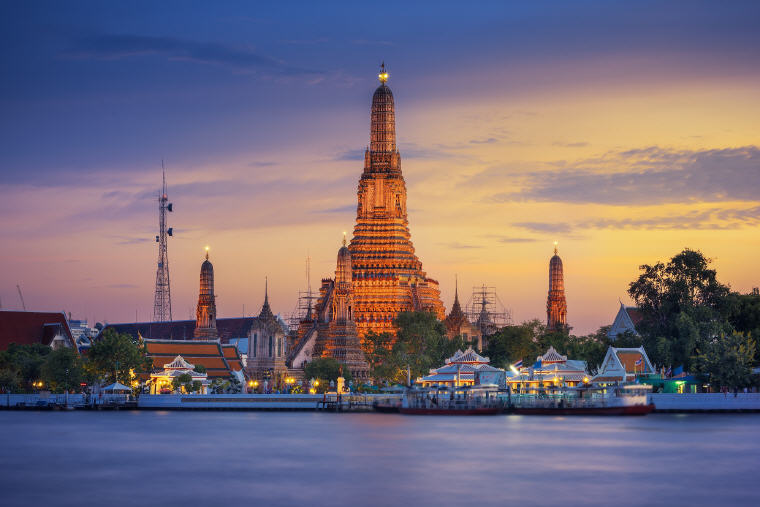 Wat Arun or the Temple of Dawn in Bangkok

We believe you have cruised or plan to cruise along the Chao Phraya River at least once. The view along Bangkok’s most important river is truly iconic. However, among the landmarks you’ll see, Wat Arun or the Temple of Dawn is probably the most eye-catching with its 86 meter-tall central prang (Khmer-style tower) and four satellite prang.

After the long renovation, Wat Arun’s prangs are open again since last year. You can now climb the magnificent central prang and admire the colorful porcelain and seashells on all the prang. Other unmissable features of Wat Arun include the two giants demons that stand guard at the temple gate.

5 Baht Coin (Wat Benchamabophit or the Marble Temple in Bangkok)

Wat Benchamabophit or the Marble Temple in Bangkok

A little out of the way since it isn’t in Bangkok Old Town, the Marble Temple (or Wat Ben for short) is still worth the journey. The ordination hall (ubosot) is elegantly constructed out of Carrara marble from Italy, hence the name.

The Marble Temple also enshrines the bronze replica of Phra Buddha Chinnarat, which is known as the most beautiful Buddha image in Thailand. Under the replica of Phra Buddha Chinnarat lie the ashes of King Rama V, who commissioned the construction of the Marble Temple and ordained as a monk here. The temple name “Wat Benchamabophit”, in fact, means the temple of the fifth king. Now you see why the temple is on 5 Baht coin.

2 Baht Coin (Wat Saket or the Golden Mount in Bangkok) Wat Saket or the Golden Mount in Bangkok

Hardly anything stands out more than Wat Saket when you stroll around Bangkok Old Town. Towering above the old houses in the area is the Golden Mount (Phu Khao Thong in Thai). Climb the 300-step staircase that winds around the hill and you’ll find the golden pagoda, situated at the top like a crown. Don’t worry, the staircase isn’t so steep. It’s really well-shaded and atmospheric with religious statues and even a coffee shop, complete with a fine panoramic view of Bangkok Old Town.

One of the most interesting things to take note at Wat Saket are statues of vultures and corpses on the Golden Mount. They tell the story of one of the darkest hours in Thailand history when epidemics befell Bangkok in the previous century. 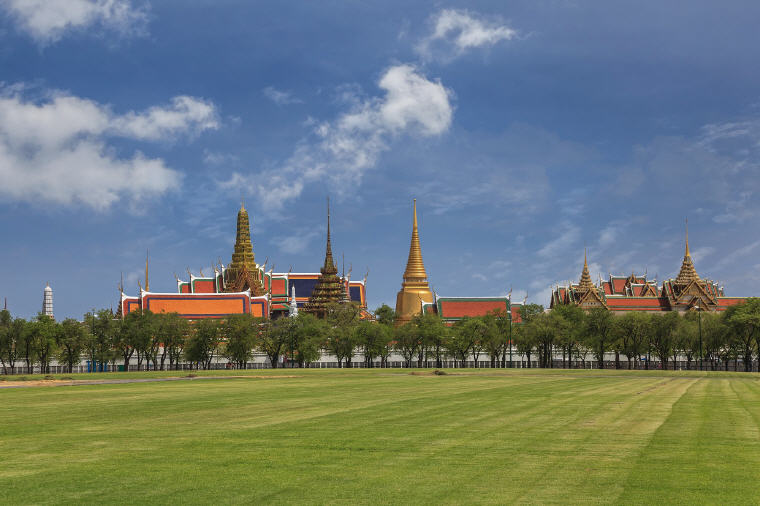 The most famous attractions in Thailand are undoubtedly the Grand Palace and the Temple of the Emerald Buddha. The complex is vast, though, and the landmarks prominently featured on the coin are the golden pagodas and the prang.

Apart from going inside the Chakri Maha Prasat Throne Hall, please walk around the palace and temple complex since it’s full of exquisite arts. Pay respect to the Emerald Buddha, admire the architecture and intricate patterns on each building and marvel at the epic murals of the Thai epic, Ramakien.

Tip: Since all these temples are in Bangkok, consider spending at least half a day making a pilgrimage to temples on Thai Baht coins! It’s always better to discover the full story from a knowledgeable local friend, so how about you travel to these temples with our Local Expert? 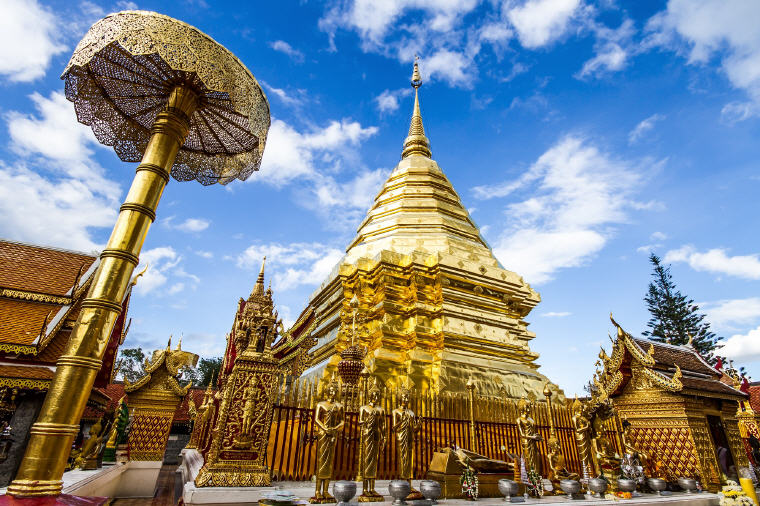 Chiang Mai’s most sacred and iconic temple is featured on the 50 satang coin. We believe you can recognize its gleaming golden pagoda containing Buddha relics, but there are more to Wat Phra That Doi Suthep than that. Its mountaintop location provides great aerial views of Chiang Mai (weather permitting). You can go up the double Naga staircase (306 steps) or breeze your way to the top with the tram.

But if you’re feeling adventurous, you can hike all the way from Doi Suthep (Mount Suthep) foot on the monk’s trail. The hike can take around 2-2.30 hours one way. Be sure you pack your insect repellent and dress respectfully because you’re on the monk’s trail (No sleeveless clothes and shorts). Along the way, you’ll find the hidden forest temple called Wat Pha Lat and a tiny waterfall in the temple complex. Don’t miss its mystical beauty. 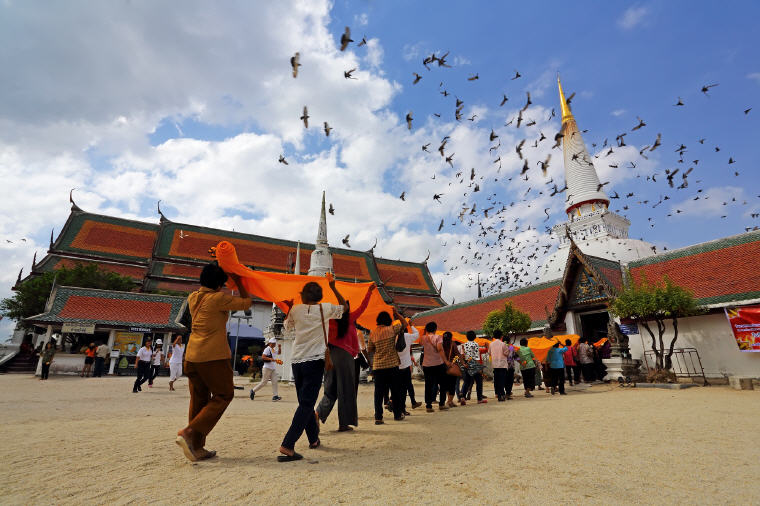 Few travelers have been to the laid-back southern city of Nakhon Si Thammarat, so here is your chance to explore the lesser known but no less charming city. Wat Phra Mahathat is the most prominent temple in Nakhon Si Thammarat and one of the holiest temples in Southern Thailand. Its signature white stupa is huge and houses a Buddha tooth relic.

If you visit during Makha Bucha Day. (the full moon day of February), you can join Hae Pha Khuen That. The festival has been ongoing for almost 800 years old and Buddhists parade a large piece of cloth up to wrap it around the stupa. The temple has several other pagodas and they are all wrapped too and that’s a unique sight.

We hope to enjoy the other side of Thai coins. Details matter and sometimes you don’t have to look too far to find wonders. If you want to discover more local stories, explore Thailand with TakeMeTour Local Experts.

TakeMeTour
TakeMeTour
Open your eyes and see Thailand through the eyes of the locals. Come with Local Experts and live the experience like Thais do. Discover unique 1-day trips at your fingertips with TakeMeTour, Thailand's largest marketplace for 1-day trips by locals.