Singapore has recently been named as the world’s number one country to travel in 2015 by Lonely Planet’s latest guidebook. A small island country and one of the world’s most densely populated countries. Yet unlikely many other densely populated countries, Singapore has more than 50% of its area covered by greenery and with over 300 parks and 4 nature reserves, making it an enchanting garden city. Pockets of amazing natural wonders are waiting to be discovered throughout Singapore and the following 4 wildlife parks in Singapore offer you endless amazing encounters and a welcome respite from the bustle of the city.

Jurong Bird Park has almost every species to impress avian lovers, along with fun exhibits, interactive shows, and of course, its charming residents. Uncover hidden gems in this chirpy treasure trove of over 5,000 birds from 400 species and get up close to these feathered friends – literally have them eating out of your hand.

Be entertained by majestic creatures of flight too. Witness the heat of the hunt as mighty eagles, falcons and hawks show off their moves during the Kings of the Skies Show, or be part of the flock at the High Flyers Show. And if that is not enough, you can also dine with the parrots and penguins.

Your kids will especially love Birdz of Play, the bird-themed water playground, for a soaking good time under the giant tipping bucket, zipping across the Flying Fox and even arcade games.

A visit to this amazing bird sanctuary is guaranteed to sweep you off your feet.

Venture into the world of darkness and get ready for a wild night out!

Instead of going to a club, pop into another popular nightspot, the Night Safari, and mingle with a different crowd of animals at this special zoo. Opened in 1994 and located next to the Singapore Zoo, the Night Safari is the world’s first safari park for nocturnal animals. But it resembles a wildlife park more than an actual safari.

Your eyes will take a while to adjust to the darkness here, but once they do, you can experience up close and personal encounters with over 2,500 nocturnal animals from over 130 species – including many indigenous to the region, such as the endangered Asian elephant, Malayan tapir and Malayan tiger.

Kick start your adventure with their fiery Thumbuakar tribal performance and continue your journey onboard an exciting guided tram ride across seven geographical zones of the world – from the rugged Himalayan Foothills to the swampy banks of Equatorial Africa.

Explore the world’s most iconic river habitats for close encounters with giants and monsters.

Showcasing more than 6,000 animals, including 40 threatened aquatic and land species, discover one of the world’s largest collection of river-dwelling wildlife here. Go on the 10-minutes Amazon River Quest boat ride and meet animals such as the Brazilian tapir and jaguar. Then, enjoy a relaxing 15-minute journey through nature’s tranquil heart on the River Safari Cruise.

Be surrounded by lush greenery, exciting animal encounters and more when you step into the world’s best rainforest zoo! 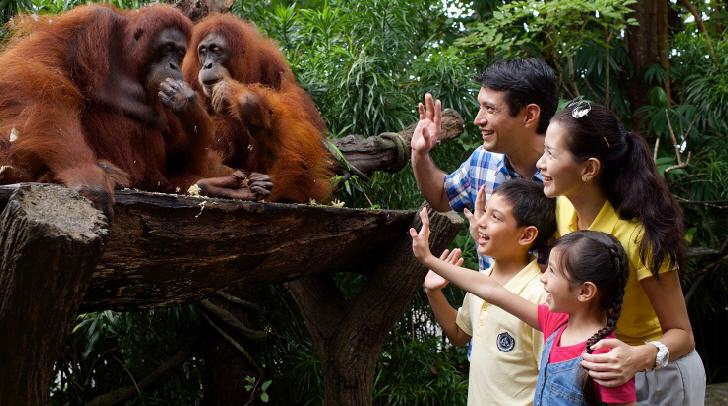 At this beautifully designed zoo where animals live in naturalistic habitats, you can trek along foot tracks or hop on to a guided tram to see natural wonders like the endangered white tiger and the world’s largest collection of proboscis monkeys.

In the Fragile Forest you will enter a massive biodome that recreates the amazing diversity of the rainforest. Here you can find mousedeer on the forest floor, or climb to the observation deck to catch a glimpse of the flying foxes that often glide over the heads of visitors!

At the Australian Outback, get the kangaroos and wallabies to eat out of your hands. Other zones include the Primate Kingdom, where each of the 39 primates on display have their own island, or the Reptile Garden, which houses giant tortoises and fearsome Komodo dragons.

Catch their interactive and enriching animal presentations, including Animal Friends Show, Elephants at Work and Play, and Rainforest Fights Back. Be sure to check out the timing of the shows, arrive early and get a prime spot!

The zoo is definitely one of the amazing wildlife parks in Singapore, which is ideal for families. The kids will be kept busy with activities like the Kidzranger Tour, which lets them try their hand at being a zoo keeper.

Getting to the Parks

Whether it’s taking flight into the colourful world of birds at the Jurong Bird Park or venturing into the world of darkness and getting ready for a wild night out at the Night Safari or exploring the world’s most iconic river habitats for close encounters with giants and monsters or simply be surrounded by lush greenery, exciting animal encounters and more when you step into the world’s best rainforest zoo, these 4 amazing wildlife parks in Singapore will surely give you endless amazing encounters and experience.