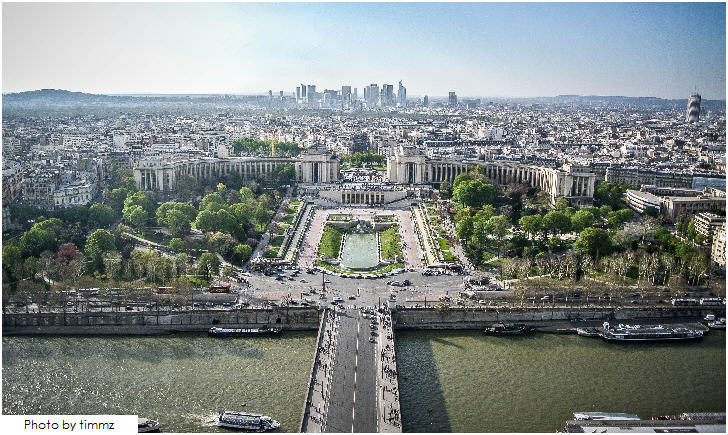 “When you look at a city, it’s like reading the hopes, aspirations and pride of everyone who built it.” – Hugh Newell Jacobsen

These 25 best cities in the world were the result of a survey ran on Lonely Planet asking travellers and their staff to nominate their favourite cities. A list of 200 cities was provided for inclusion in the book, The Cities Book. You can go through the list below with a short excerpt of each city from The Cities Book. Guess which cities turned up in the top 5 positions?

Paris is the capital city of France, situated on the Seine River, in the north of the country, it is at the heart of the Île-de-France region, also known as the région parisienne.

Paris has it all: celebrity monuments, manicured parks, taste-bud-tangling cuisine, endless museums, frentic flea markets and haute couture – and like its well-groomed citizens, it always looks good, without a hair out of place.

Not much about New York City is subtle – it boasts vibrant architecture, world-class art, fashion and entertainment, snarling traffic, spirited politics, and a rich and radical history infused with the tradition of immigration that endures today.

Sydney is the state capital of New South Wales and the most populous city in Australia and Oceania. It is on Australia’s south-east coast, on the Tasman Sea.

Sparkling in the sunlight and revelling in the limelight, Sydney is all glitz and glam – and catching sight of Sydney Harbour for the first time is one of life’s memorable experiences.

Britain’s economic motor, London is one of the most vibrant, multiculturally diverse spots on earth, where you can listen to any style of music, view any kind of art and sample world cuisines.

Rome is the capital of Italy and also of the Province of Rome and of the region of Lazio. It is also the country’s largest and most populated comune and fourth-most populous city in the European Union by population within city limits.

Whether they’re romantics, art-lovers, gourmands or historians, when you tell people you’re going to Rome, they’ll sigh – even if they haven’t been there.

Post dot-gone, the City by the Bay sparkles on with literally luminaries, artsy stars and an array of cultures.

Bangkok is the capital and the most populous city of Thailand. It is known in Thai as Krung Thep Maha Nakhon or simply Krung Thep.

It’s a city of contrasts: glass and steel buildings shaped like cartoon robots standing next to glittering temple spires; wreaths of jasmine flowers dangling from rear-view mirrors of buses and taxis; shaven-headed, orange-robed monks walking barefoot along the street beneath a bank of giant Sony screens blasting MTV Asia.

Cape Town is the second-most populous city in South Africa, after Johannesburg, and the provincial capital and primate city of the Western Cape.

Even transient visitors can’t help but devote a few million brain cells to storing images of Cape Town’s grandeur, from its striking Table Mountain backdrop to its glorious beaches and strange and wonderful wildlife.

Istanbul is the largest city in Turkey, constituting the country’s economic, cultural, and historical heart.

The masterpiece of the Byzantine and Ottoman Empires in its former incarnations as Byzantium and Constantinople, this is a rambunctious, energetic and bewitching city.

Suave, sophisticated and stark-raving sports mad, Melbourne is an arty powerhouse with an eye on the Melbourne Cup and a mouthful of world-class cuisine.

Hong Kong, officially known as Hong Kong Special Administrative Region of the People’s Republic of China, is an autonomous region on the southern coast of China geographically enclosed by the Pearl River Delta and South China Sea.

Hong Kong is a noisy, vibrant fusion of West and East, packed with business people, markets, temples, futuristic buildings, double-decker trams and boats crisscrossing the harbour – it is unlike anywhere else on earth.

Kathmandu is the capital and largest urban agglomerate of Nepal. The agglomerate consists of Kathmandu Metropolitan City at its core, and its sister cities Patan, Kirtipur, Thimi, and Bhaktapur.

This amazing city seems, in places, unchanged since the Middle Ages; at other times it is just another developing-world capital rushing into a modern era of concrete and traffic pollution.

Prague is the capital and largest city of the Czech Republic. It is the fourteenth-largest city in the European Union and also the historical capital of Bohemia.

Vancouver, officially the City of Vancouver, is a coastal seaport city on the mainland of British Columbia, Canada.

Casual but cosmopolitan, freewheeling Vancouver is framed by mountains with sea kissing its edges.

Buenos Aires is the capital and largest city of Argentina, and the second-largest metropolitan area in South America, after Greater São Paulo.

One of the world’s most seductive, sophisticated and cool cities, Buenos Aires is the pounding cultural and economic heart of Argentina.

With renowned beaches, green mountainous surrounds and streets that seethe with sensuality, Rio has more than its fair share of natural and cultural riches.

Berlin is the capital city of Germany and one of the 16 states of Germany. With a population of 3.5 million people, Berlin is Germany’s largest city.

Berlin is evolving, adapting, throwing up surprises and questioning its identity; while filled with history, she is determined to move ever forward.

Jerusalem, located on a plateau in the Judean Mountains between the Mediterranean and the Dead Sea, is one of the oldest cities in the world. It is considered holy to the three major Abrahamic religions—Judaism, Christianity and Islam.

Jerusalem’s place in the hearts and minds of so many people endows it with a charged atmosphere unlike any other city.

Montréal is a city in the Canadian province of Quebec. It is the largest city in the province, the second-largest in Canada and the 8th-largest in North America.

As the locals say, it’s Europe and America rolled into one: achingly hip, proudly diverse, bilingual, and all set in a rousing frontier landscape.

Edinburgh is the capital city of Scotland, situated in Lothian on the southern shore of the Firth of Forth. It is the second most populous city in Scotland and the seventh most populous in the United Kingdom.

Since the reinstatement of the Scottish Parliament in 1999, Edinburgh has been booming with rising property prices, new building projects, and wealthy inhabitants – in financial and cultural terms.

Venice is a city in northeastern Italy sited on a group of 118 small islands separated by canals and linked by bridges.

There’s no city on earth whose visual impact has the same power as Venice – the Adriatic island republic is reluctantly part of Italy, but in reality belongs to the entire world as one of the great cultural treasures anywhere on the planet.

Hanoi is the capital of Vietnam and the country’s second largest city.

Hanoi’s beguiling boulevards, Belle Époque architecture and peaceful parks and pagodas are enough to recommend it, but there’s also the bonus of a vibrant, optimistic population and fantastic food.

Amsterdam is the capital city of and most populous within the Kingdom of the Netherlands.

Singapore, officially the Republic of Singapore, is a sovereign city-state and island country in Southeast Asia. It lies off the southern tip of the Malay Peninsula and is 137 kilometres north of the equator

An island city that’s a land unto itself all tricked-out with Southeast Asia’s latest tech toys, Singapore is at a cultural crossroads that includes Indian, Malay and Chinese communities best served up at hawker stall.