This collection of breathtaking runs, runners’ travel bucket list for stunning marathons, will leave you ready to sign up, train, pack, go, and run. These marathons may all be 26.2 miles but they are definitely not created equal. Each offers different challenge, from scaling the Great Wall of CHINA to dressing up for the yearly theme of the Marathon du Médoc in France. These international marathons top the list as the most popular, exciting, inspirational, runner-favorite bucket list races you’ll find on the planet – marathons worth traveling the world for.

The Great Wall Marathon began in 1998 when Albatros Travel’s founder Søren Rasmussen came up with the idea of arranging a marathon on the Great Wall of China. The following year, in 1999, the first Great Wall Marathon took place with 292 runners. Here, nature surrounds you and you feel so close to the culture of the country that the experience is almost overwhelming. Since its inception in 1999, the Great Wall Marathon has become revered as one of the world’s most challenging marathons where runners will be challenged to 5,164 historic steps along the wall; prepare to add 1-2 hours to your time. 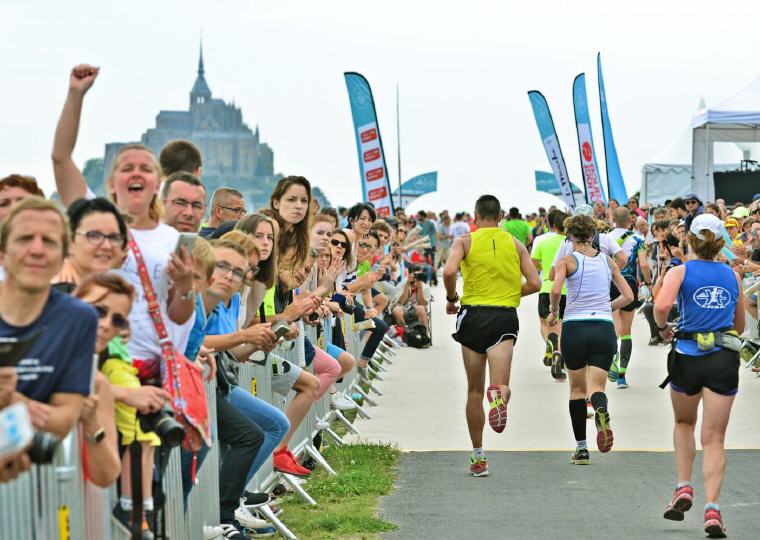 This is the only point-to-point marathon in France where one can actually see the finish from the start. It starts with a nice run along the seafront of the Bay going through (among other interesting spots) Le Vivier-sur-Mer, a mytiliculture area and Cherrueix which is famous for it’s sand-yachting races It then crosses a polder area before approaching the Mount. The relatively flat terrain makes it easy to concentrate on the vistas of the vast Bay of Mont Saint-Michel and the imposing view of the island municipality, a former monastery and hulking edifice on the shoreline.

Rome is the #7 Destination in the world for 2015 in TripAdvisor travelers’ choice and one of the world’s most beautiful and inspiring capitals. To say that Maratona di Roma is a tourist’s dream run is no exaggeration at all. The course includes almost all the most beautiful and important monuments, streets and squares of Rome. The race starts and ends near the Colosseum and includes portions along the Tiber River.

Next marathon: 8 April 2018. See here for more details of registration.

Search your hotel with Booking.com
Search flights to Rome 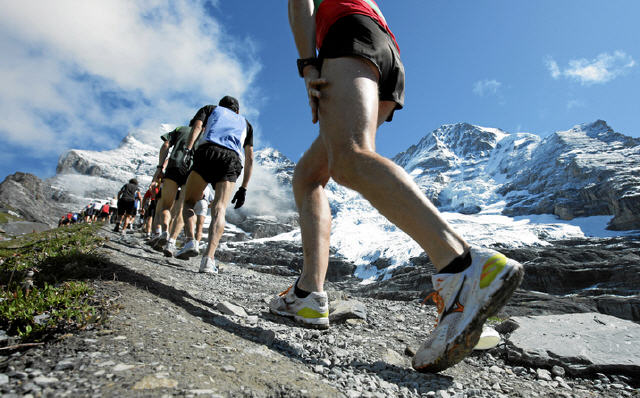 The Jungfrau-Marathon presents one of the most beautiful and demanding marathon courses of the world – marvelous mountains scenery and the excellent change of the landscape between the start in Interlaken and the finish on Kleine Scheidegg. The difference in altitude of 1829 meter is a challenge for everybody. There is no Marathon in Europe with such great dimensions. Eiger, Mönch and Jungfrau the most famous mountains peaks of the Alps loom majestically over the course!

Marathon du Médoc, starting in the town of Pauillac weaves through scenic vineyards in the Medoc region near Bordeaux. Nicknamed “The longest marathon in the world”, runners strive to run 26 miles in a generous time limit of six hours and 30 minutes. But no one is rushing as runners sample as many glasses of wine as they can handle while tucking into a banquet of French delicacies such as oysters, foie gras, cheese, steak and ice-cream. As if it’s not enough with all the drinking, Marathon du Médoc is themed each year; runners must dress up according to the year’s theme. 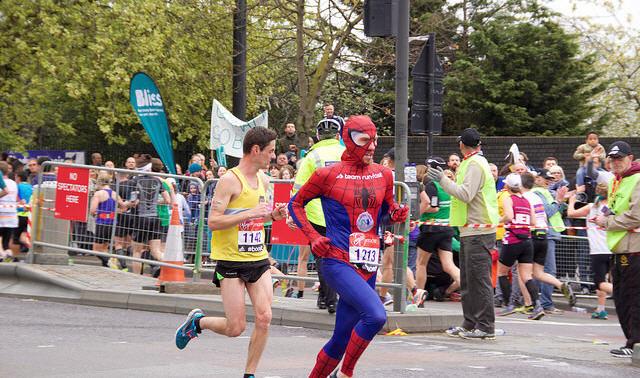 Listed as one of the top 10 marathons worth traveling for in Forbes, nearly 40,000 people run the Virgin Money London Marathon, every year. It is also one of the top six world marathons that form the World Marathon Majors. The Virgin Money London Marathon starts at Greenwich Park and run over a largely flat course around the River Thames. Runners cross the Tower Bridge reaching the half-way point as they cross Tower Bridge. Heading into the final leg of the race, runners pass The Tower of London on Tower Hill. In the penultimate mile along The Embankment, the London Eye comes into view, before the athletes turn right into Birdcage Walk to complete the final 352 m (385 yards), catching the sights of Big Ben and Buckingham Palace, and finishing in The Mall alongside St. James’s Palace. Mark your calendar to sign up for 2016.

The Big Sur International Marathon is a spectacular road race set along one of the most breathtaking courses in the world. Staged entirely on Highway One from Big Sur all the way up to Carmel, runners are treated to panoramic views of the Pacific Ocean to the west coupled with the pastoral beauty of the coastal mountain range to the east. The Big Sur International Marathon is one of the largest rural marathons in the world, bordered by ranches and redwoods on one side and the never-ending Pacific on the other. Runner’s World magazine named Big Sur as one of the country’s top three marathons behind Boston and New York. It has also been designated as the “best destination marathon” and most scenic marathon. 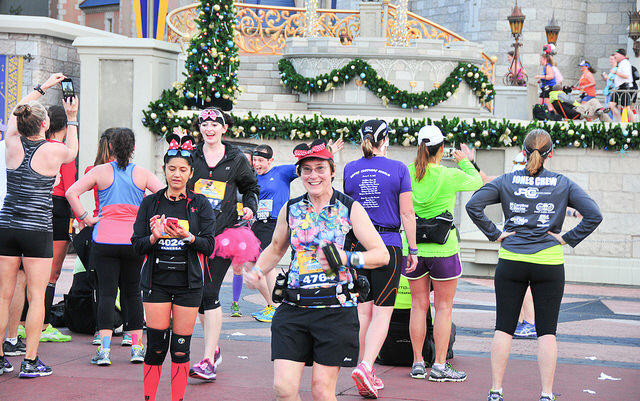 The Walt Disney World® Marathon, the most magical 26.2 miles on Earth, takes you through all four Walt Disney World® Theme Parks, starting at Epcot®, continuing on to the Magic Kingdom® Park, Disney’s Animal Kingdom® Park and Disney’s Hollywood Studios before an exhilarating finish back at Epcot®. Plus get high fives from Mickey and other Disney characters cheering you on. 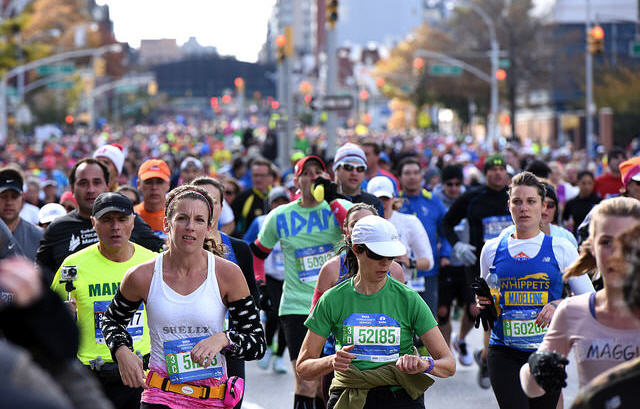 The New York City Marathon has grown from a Central Park race with 55 finishers to one of the world’s biggest and most popular marathons, with 51,394 finishers in 2016.

Use Airbnb, the Official Community Hospitality Partner of NYRR, to stay with a New Yorker and be a local for the marathon! With apartments and rooms in every neighborhood across New York City. 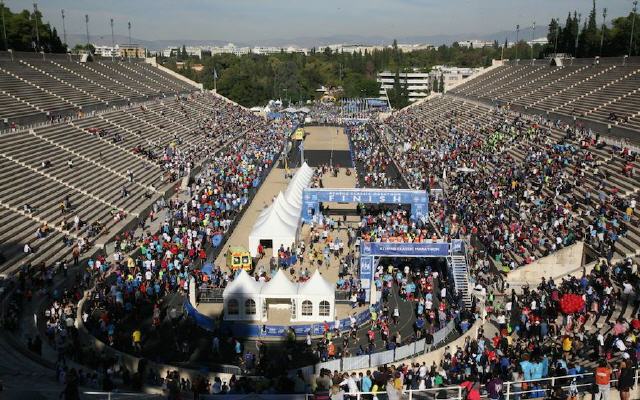 Run the race where it all started. The modern Athens Marathon commemorates the run of the soldier Pheidippides from a battlefield at the site of the town of Marathon, Greece, to Athens in 490 B.C. The Athens Marathon is recognized as the original marathon course and it is perhaps one of the most difficult major marathon races: the course is generally uphill from the 10 km mark to the 31 km mark – the most difficult part of the course starts from Gerakas and goes up to Stavros Junction (30km – 31km). At the last part of the Marathon Course the runners have eye contact with the Panathinaikon Stadium, passing by the Presidential Residency and the National Gardens. Only a few meters remain in order for the runners to enter the Stadium and run the last meters inside it, before reaching the finish line.

Definitely one of the marathons worth traveling the world for, The Big Five Marathon in South Africa is held among the wildlife of the African savannah with a challenging marathon route going right through the habitat of the most famous African game: Elephant, Rhino, Buffalo, Lion and Leopard. Runners from all over the world will be rewarded with up-close views of antelope, giraffes and zebras — one leg of the race even takes runners through lion territory. No fences, no rivers, nothing at all separates the runners from the African wildlife. 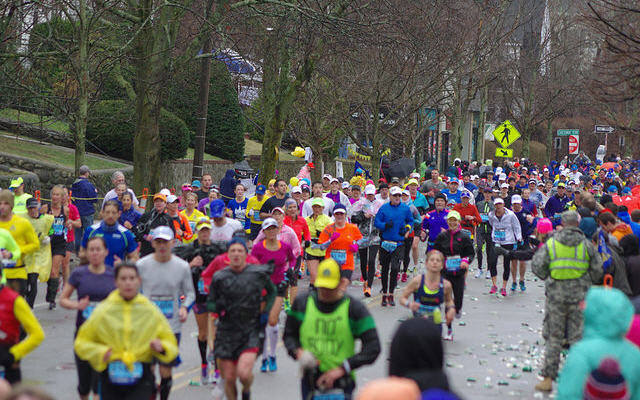 Boston marathon is the world’s oldest annual marathon and ranks as one of the world’s best-known road racing events. Running in the Boston Marathon is a lifelong goal even for veteran runners. Runners must qualify with a time (based on age and gender) from another marathon run in the past year in order to participate. Marathon Monday is a holiday for Bostonians, and they welcome the running community with full energy, cheering them on the entire 26.2 miles. After you’ve conquered the infamous Heartbreak Hill between miles 20 and 21, it’s all downhill from there.

Next marathon: 16 April 2018. Registration for the 2018 Boston Marathon is closed (Source)

Search for accommodation for Boston Marathon 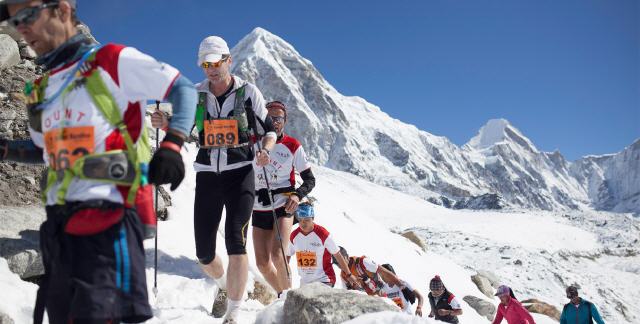 Tenzing-Hillary Everest Marathon is “probably the most adventurous trail run in the world.” The marathon starts from the Everest Base Camp (5364m/17,598ft) and finishes at Namche Bazaar (3446m/11306ft). The measured distance of the course is 42.195 km (26.2 miles) over rough mountain trails.

All participants of are requested to be in Nepal three weeks prior to the race for acclimatizing to the high altitude. This three-week holiday combines sightseeing tour in the capital, Kathmandu, a 14 day trek to the marathon starting point under medical supervision, an ascent of Kala Patthar (5545m/18200ft) for the best views of Everest. Although the course of the Everest Marathon is basically downhill, there are two steep uphill sections. There may be snow and ice on the upper part and considerable exposure along much of the marathon route Experience of rough terrain is essential.

Next marathon: 29 May 2018. For more information, go to everestmarathon.com 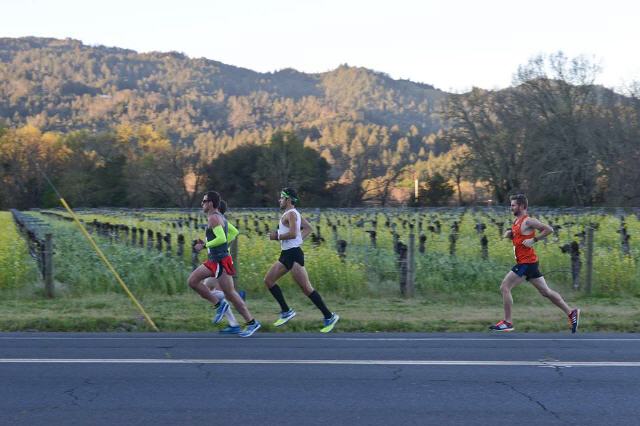 The Napa Valley Marathon route is one of the most picturesque marathon courses in the world, running the length of the famed Napa Valley wine-growing region. The course is predominantly downhill, traveling from 380 feet above sea level to 80 feet above sea level at the finish line. There are rolling hills in the first six miles and the course is relatively flat thereafter, making it well suited course for beginning marathoners. With the exception of the last half-mile, the whole course is rural. Runners enjoy panoramic views of the valley, flowering fruit trees, and peaceful vineyards, carpeted with golden mustard flowers. 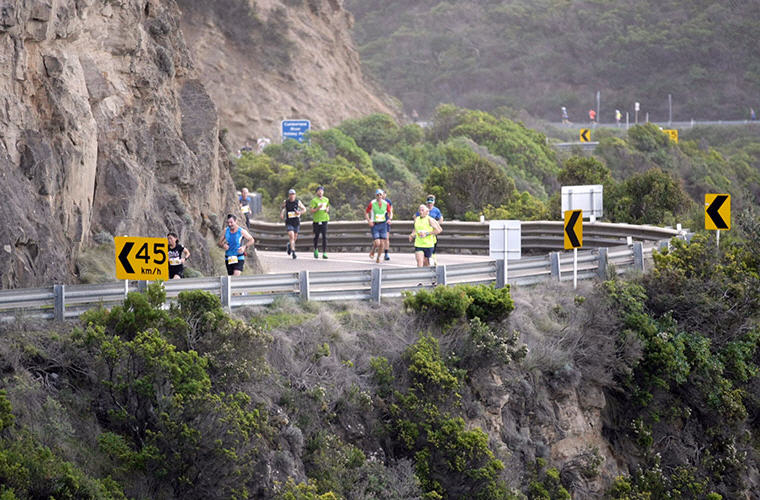 Victoria’s iconic Great Ocean Road is home to one of the world’s most visually spectacular marathons, The Great Ocean Road Marathon. The beautiful and panoramic view of the southern ocean has attracted many runners from around the world, all eager to participate in this challenging and pristine Autumn conditions. As you run along this course, with no traffic at all, you’ll be able to experience the absolute serenity. Perhaps, the only sound you will hear is the soft thud of footsteps from your fellow competitors.

There you have it, a list of 15 marathons worth traveling the world for and yet this list will never be a complete list. I believe that every runner will have his or her own runner’s travel bucket list. What are the marathons in your list you will travel the world for?

Looking for an affordable and good pair of runner shoes? Check out this article on Avia’s running shoes at Runner Click.